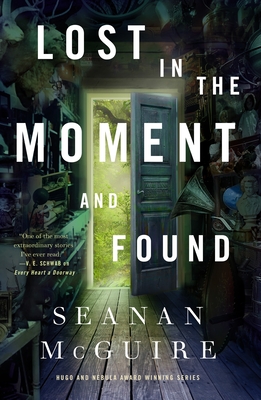 Lost in the Moment and Found (Wayward Children #8)

“Emotionally resonant, thoughtfully complex, and endlessly creative, Lost in the Moment and Found is an excellent addition to the Wayward Children books. If you cracked my heart open, you’d find this series there.”
— Jodi Laidlaw, Blue Cypress Books, New Orleans, LA
View the List

A LibraryReads Hall of Fame Inductee!

A young girl discovers an infinite variety of worlds in this standalone tale in the Hugo and Nebula Award-winning Wayward Children series from Seanan McGuire, Lost in the Moment and Found.

Welcome to the Shop Where the Lost Things Go.

If you ever lost a sock, you’ll find it here.
If you ever wondered about a favorite toy from childhood... it’s probably sitting on a shelf in the back.
And the headphones that you swore this time you’d keep safe? You guessed it….

Antoinette has lost her father. Metaphorically. He’s not in the Shop, and she’ll never see him again. But when Antsy finds herself lost (literally, this time), she discovers that however many doors open for her, leaving the Shop for good might not be as simple as it sounds.

And stepping through those doors exacts a price.

Lost in the Moment and Found tells us that childhood and innocence, once lost, can never be found.


Praise For Lost in the Moment and Found (Wayward Children #8)…

Praise for Lost in the Moment and Found

“The eighth book (after Where the Drowned Girls Go) of McGuire’s “Wayward Children” series is a haunting adventure about the loss of childhood innocence and ultimately, about finding strength and belonging. ” —Library Journal, starred review

“Antsy is a pleasing addition to the lore of Wayward Children, promising plenty of intrigue to come.” —Booklist

“I am always in awe of the ways in which McGuire can deliver whimsical magical worlds, while also discussing complex themes…” —Lili, Utopia State of Mind

Praise for the Wayward Children series

“The series as a whole has wonderfully internally consistent world building and characters, no matter how far in the background, with complexity and depth.” —Booklist

“A great read for middle and high schoolers who enjoy themes of friendship and family, and a magical world of unicorns and centaurs.” —School Library Journal on Across the Green Grass Fields

“A mini-masterpiece of portal fantasy that deserves to be shelved with Lewis Carroll's and C. S. Lewis' classics.” —NPR on Every Heart a Doorway

“Anyone who appreciates off-the-beaten-path adventures will be swept away.” —Publishers Weekly, starred review, on Across the Green Grass Fields

“One of the most extraordinary stories I've ever read.” —V. E. Schwab on Every Heart a Doorway

SEANAN McGUIRE is the author of the Hugo, Nebula, Alex and Locus Award-winning Wayward Children series, the October Daye series, the InCryptid series, and other works. She also writes darker fiction as Mira Grant. Seanan lives in Seattle with her cats, a vast collection of creepy dolls, horror movies, and sufficient books to qualify her as a fire hazard. She won the 2010 John W. Campbell Award for Best New Writer, and in 2013 became the first person to appear five times on the same Hugo ballot. In 2022 she managed the same feat, again!
Loading...
or support indie stores by buying on