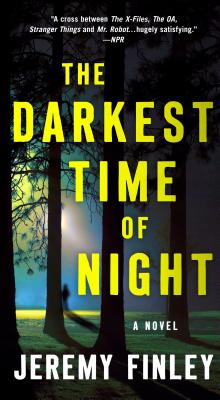 The Darkest Time of Night

“X-Files fans will eat up this TV reporter’s book: It’s out there.” —People

When the seven-year-old grandson of a U.S. Senator vanishes in the woods behind his home, the only witness is his older brother. “The lights took him,” he says—and never utters another word again. As the FBI and National Guard launch a massive search, the boys’ grandmother, Lynn, comes to realize that her greatest fear has come back to haunt her and her family.

In the late 1960s, before she became the devoted wife of a politician, Lynn worked in the astronomy department at the University of Illinois. As secretary for a prominent professor, Lynn took messages from people desperate to find their missing loved ones who had vanished into beams of light. Now, determined to find her grandson, Lynn must return to the work she once abandoned to unravel the existence of a place long forgotten by the world. It is there, buried deep beneath the bitter snow and the absent memories of its inhabitants, where the darkest secrets may finally come to light. But there are forces that wish to silence her. And Lynn will find how far they will go to stop her…and how the truth about her own forgotten childhood could reveal the greatest mystery of all time.


Praise For The Darkest Time of Night: A Novel…