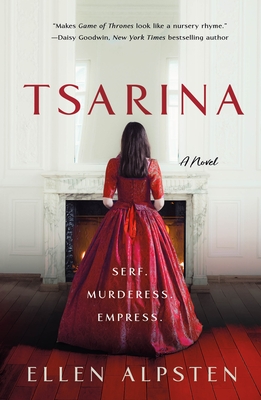 “Ellen Alpsten’s debut is a riveting, delicious escape into the world of Catherine the I, Tsarina of Russia. My head is swimming with the sights and sounds of Moscow and St. Petersburg. Alpsten’s fascinating account reveals the unforgettable woman who went toe to toe with her husband, Peter the Great. Exactly the kind of book I needed to read right now!”
— Anderson McKean, Page and Palette, Fairhope, AL
View the List

St. Petersburg, 1725. Peter the Great lies dying in his magnificent Winter Palace. The weakness and treachery of his only son has driven his father to an appalling act of cruelty and left the empire without an heir. Russia risks falling into chaos. Into the void steps the woman who has been by his side for decades: his second wife, Catherine Alexeyevna, as ambitious, ruthless and passionate as Peter himself.

Born into devastating poverty, Catherine used her extraordinary beauty and shrewd intelligence to ingratiate herself with Peter’s powerful generals, finally seducing the Tsar himself. But even amongst the splendor and opulence of her new life—the lavish feasts, glittering jewels, and candle-lit hours in Peter’s bedchamber—she knows the peril of her position. Peter’s attentions are fickle and his rages powerful; his first wife is condemned to a prison cell, her lover impaled alive in Red Square. And now Catherine faces the ultimate test: can she keep the Tsar’s death a secret as she plays a lethal game to destroy her enemies and take the Crown for herself?

From the sensuous pleasures of a decadent aristocracy, to the incense-filled rites of the Orthodox Church and the terror of Peter’s torture chambers, the intoxicating and dangerous world of Imperial Russia is brought to vivid life. Tsarina is the story of one remarkable woman whose bid for power would transform the Russian Empire.


Praise For Tsarina: A Novel…

"As detailed as the jewels and enamel inlay on the creations of Faberge...[a] crisp, elegant fictional account of history, woven with emotion and brio." —Adriana Trigiani, bestselling author of The Shoemaker's Wife

“Gripping...Love, sex, and loyalty vie with war, intrigue, and treason to create an epic canvas as exotic and powerful as eighteenth-century Russia itself. Masterfully researched and beautifully written, this is historical fiction at its best.” —Nancy Goldstone, author of Daughters of the Winter Queen and Rival Queens

“Intrigue, rivalry, and sumptuous decadence leap to vivid life in this fascinating story of Peter the Great’s second wife...conjuring the gorgeous marble of the Winter Palace and deprivation of Russia in the 18th century, the perilous ascent to power of the first woman to rule as empress is a gripping and unforgettable journey.” —C.W. Gortner, author of The Romanov Empress

ELLEN ALPSTEN was born and raised in the Kenyan highlands. Upon graduating from L'Institut d'Etudes Politiques de Paris, she worked as a news anchor for Bloomberg TV London. Whilst working gruesome night shifts on breakfast TV, she started to write in earnest, every day, after work and a nap. Today, Ellen works as an author and as a journalist for international publications such as Vogue, Standpoint and CN Traveller. She lives in London with her husband, three sons and a moody fox red Labrador. Tsarina is her debut novel.
Loading...
or support indie stores by buying on