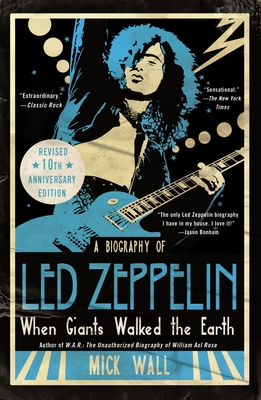 A Biography of Led Zeppelin

Rock writer Mick Wall draws on insider access, as former confidante to both Plant and Page, to craft the definitive biography of the world's most legendary rock band—Led Zeppelin. In When Giants Walked the Earth, Wall audaciously tells the story of the band known not just as one of the biggest-selling bands of all-time, but also as the one that set the mark for on-the-road excess.

Detailed and revealing, When Giants Walked the Earth bores into not only the disaster, addiction and death that haunted the band but also into the real relationship between Page and Plant, including how it was influenced by Page's interest in the occult. Comprehensive and yet intimately detailed, When Giants Walked the Earth literally gets into the principals' heads to bring to life both an unforgettable band and an unrepeatable slice of rock history.

This edition includes approximately 35,000 words of new material about the band and the last decade, featuring fresh interviews and newly unearthed content.

MICK WALL is one of England’s best known music journalists: his work has appeared in Classic Rock, Mojo, the London Times and a variety of other publications, and his books include the rock ‘n’ roll biographies When Giants Walked the Earth and Enter Night. He has also served as a trusted on-camera source for a number of BBC-TV music documentaries. He lives in England.

Praise For When Giants Walked the Earth 10th Anniversary Edition: A Biography of Led Zeppelin…

“His access and attention to detail make this a definitive work...an essential source for anyone eager to learn about the era when rock stars ruled the world.” —Publishers Weekly

“Wall does well to shine light on the myths and music magic of Led Zep--rendering what could have been cartoonish real and sincere.” —TimeOut Chicago

“It deftly strikes the balance between lofty authority and finding a way to get inside the heads of its subjects.” —The Guardian (UK)

“[T]his is the big one: a fat, juicy biography of the biggest band ever.” —Daily Telegraph (UK)