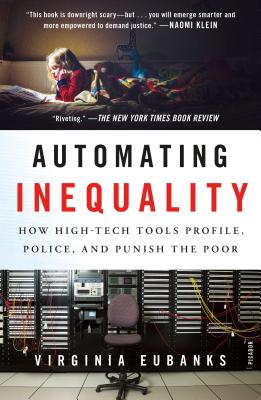 How High-Tech Tools Profile, Police, and Punish the Poor

Astra Taylor, author of The People's Platform: "The single most important book about technology you will read this year."

Dorothy Roberts, author of Killing the Black Body: "A must-read."

The State of Indiana denies one million applications for healthcare, foodstamps and cash benefits in three years—because a new computer system interprets any mistake as “failure to cooperate.” In Los Angeles, an algorithm calculates the comparative vulnerability of tens of thousands of homeless people in order to prioritize them for an inadequate pool of housing resources. In Pittsburgh, a child welfare agency uses a statistical model to try to predict which children might be future victims of abuse or neglect.

Since the dawn of the digital age, decision-making in finance, employment, politics, health and human services has undergone revolutionary change. Today, automated systems—rather than humans—control which neighborhoods get policed, which families attain needed resources, and who is investigated for fraud. While we all live under this new regime of data, the most invasive and punitive systems are aimed at the poor.

In Automating Inequality, Virginia Eubanks systematically investigates the impacts of data mining, policy algorithms, and predictive risk models on poor and working-class people in America. The book is full of heart-wrenching and eye-opening stories, from a woman in Indiana whose benefits are literally cut off as she lays dying to a family in Pennsylvania in daily fear of losing their daughter because they fit a certain statistical profile.

The U.S. has always used its most cutting-edge science and technology to contain, investigate, discipline and punish the destitute. Like the county poorhouse and scientific charity before them, digital tracking and automated decision-making hide poverty from the middle-class public and give the nation the ethical distance it needs to make inhumane choices: which families get food and which starve, who has housing and who remains homeless, and which families are broken up by the state. In the process, they weaken democracy and betray our most cherished national values.

This deeply researched and passionate book could not be more timely.


Praise For Automating Inequality: How High-Tech Tools Profile, Police, and Punish the Poor…

"This is a rigorous, compelling piece of qualitative social science and one of the best-crafted nonfiction books I’ve ever read, period. As a journalist, it made me actively envious of its prose.... a reminder of what can go awry when politicians mistake technical solutions for political solutions." —Dylan Matthews, Vox

"Required reading for the modern age, Automating Inequality explains through beautifully rendered individual stories and deeply researched historical analysis why we must remain vigilant and skeptical of the promises of artificial intelligence fed to us by those who stand to gain from their adoption." —Cathy O'Neil, New York Times bestselling author of Weapons of Math Destruction

"[Automating Inequality's] argument is that the use of automated decision-making in social service programs creates a "digital poorhouse" that perpetuates the kinds of negative moral judgments that have always been attached to poverty in America...Eubanks proposes a Hippocratic oath for data scientists, whereby they would vow to respect all people and to not compound patterns of discrimination." —The New York Review of Books

"Riveting (an accomplishment for a book on technology and policy). Its argument should be widely circulated, to poor people, social service workers and policymakers, but also throughout the professional classes. Everyone needs to understand that technology is no substitute for justice.” —The New York Times Book Review

"A brilliant book about how we penalize poverty. It would make a great pairing with Evicted." —Barbara Fister, Inside Higher Ed

“Eubanks ably demonstrates why everyone should be very, very worried about the present and future of poverty management. Along with the personalized stories, her data exposes the political will, the ease of establishment and the ripe soil for letting cold math take our deepest biases and, in effect, render them into invisible cages for the most vulnerable.” —NY Daily News

"Eubanks's ability to combine beautiful biographic storytelling with keen observation and criticism makes this an indispensable addition to the literature on what Cathy O'Neil calls Weapons of Math Destruction" —Cory Doctorow, Boing Boing

"To call the stories and data Eubanks has collected infuriating feels like an understatement...marginalized people are often the first to face experiments in assessment and punishment through technological tools. ..What’s incisive about Automating Inequality is how it underscores the subtle ways technology is used to this end." —New Republic

"Eubanks takes a hard look at some of the seemingly agnostic—and even well-meaning technologies—that promise to make the U.S. welfare apparatus well-oiled and efficient." —CityLab

“Computing has long been perceived to be a culture-free zone—this needs to change. But change will only occur when policymakers and voters understand the true scale of the problem. This is hard when we live in an era that likes to celebrate digitisation—and where the elites are usually shielded from the consequences of those algorithms.” —The Financial Times

"[A] must read...On par with Barbara Ehrenreich’s Nickel and Dimed or Matthew Desmond’s Evicted. It’s rigorously researched, phenomenally accessible, and utterly humbling. While there are a lot of important books that touch on the costs and consequences of technology through case studies and well-reasoned logic, this book is the first one that I’ve read that really pulls you into the world of algorithmic decision-making and inequality, like a good ethnography should." —danah boyd, author of It's Complicated

"Eubanks says we manage the poor so we don’t have to eradicate poverty....Eubanks explores three very different and widely separated approaches to managing, manipulating and controlling the poor in Indiana, the homeless in Los Angeles, and the child welfare in Pittsburgh." —San Francisco Review of Books

"Eubanks argues that automated systems separate people from resources, classify and criminalize people, and invade privacy—and that these problems will affect everyone eventually, not just the poor. The book's final chapter offers strategies to dismantle the digital poorhouse." —Booklist (starred review)

"Eubanks's advocacy for the Americans impacted by this trend is passionate and matched by incisive analysis and bolstered by impressive research." —Library Journal

"This is the single most important book about technology you will read this year. Today everyone is worrying about the Internet’s impact on democracy, but Eubanks shows that the problems facing us run much deeper than “fake news”—automated systems entrench social and economic inequality by design and undermine private and public welfare. Eubanks dives into history and reports from the trenches, helping us better understand the political and digital forces we are up against so we can effectively fight back." —Astra Taylor, author of The People's Platform: Taking Back Power and Culture in the Digital Age

"Income inequality relies on the lie of the neutrality of efficiency over the value of our common humanity. Automating Inequality exposes the deadly consequences of this plan and suggests another path. That Virginia Eubanks is our guide—a person so capable, ethical and whipsmart—is a rare combination indeed." —Adrian Nicole LeBlanc, author of Random Family

"This book is downright scary—but with its striking research and moving, indelible portraits of life in the 'digital poorhouse,' you will emerge smarter and more empowered to demand justice." —Naomi Klein, author of No Is Not Enough and This Changes Everything

“This book is for all of us: community leaders, scholars, lawyers, recipients of government assistance, and anyone alive whose survival depends upon a better understanding of how nations made wealthy by digital industries are using technology to create and maintain a permanent underclass. It is a book for our times." —Malkia A. Cyril, Executive Director and Co-founder, Center for Media Justice

"Automating Inequality is one of the most important recent books for understanding the social implications of information technology for marginalized populations in the US . As we begin discussing the potential for AI to harm people, Eubanks's work should be required reading." —Ethan Zuckerman, Director, Center for Civic Media, MIT

"Startling and brilliant... As Eubanks makes crystal clear, automation coupled with the new technologies of ethical abandonment and instrumental efficiency threaten not only the lives of millions who are viewed as disposable but also democracy itself. If you want to understand how this digital nightmare is reaching deep into the institutions that attempt to regulate our lives, and how you can challenge it, this is a must read." —Henry Giroux, McMaster University Professor for Scholarship in the Public Interest and the Paulo Freire Distinguished Scholar in Critical Pedagogy

"Equal parts advocacy and analysis—a welcome addition to the growing literature around the politics of welfare." —Kirkus Reviews

"The most data is collected on the most marginalized groups...Eubanks' ethnography makes visible the politics behind our tools." —Internetactu.net

"In this remarkable chronicle of 'how the other half lives' in the age of automation, Eubanks uncovers a new digital divide—a totalizing web of surveillance ensnaring our most marginalized communities. This powerful, sobering, and humane book exposes the dystopia of data-driven policy and urges us to create a more just society for all." —Alondra Nelson, author of The Social Life of DNA

“In this illuminating book, Eubanks shows us that in spite of cosmetic reforms, our policies for the disadvantaged remain dominated by the ancient credo of the poor law, obsessed with the exclusion and punishment of the neediest in our communities.” —Frances Fox Piven, author of Regulating the Poor

"U.S. institutions from law enforcement to health care to social services increasing punish people- especially people of color - for being poor. Automating Inequality powerfully exposes how secret, high-tech monitoring systems facilitate this injustice. A must-read for everyone concerned about modern tools of inequality in America." —Dorothy Roberts, author of Killing the Black Body and Shattered Bond

"Automating Inequality is a riveting, emotionally compelling story of vulnerable lives turned upside down by bad data, shoddy software, and bureaucrats too inept or corrupt to make things right. Systems billed as a way to protect the vulnerable in fact, all too often, do just the opposite, trapping them in a modern-day star chamber. Eubanks both gives voice to the marginalized, and offers a bold vision for dismantling the "digital poorhouse." We could all fall victim to the systems Eubanks condemns--and everyone should read this book to learn how modern governance, all too often shrouded behind impenetrable legal and computer code, actually works." —Frank Pasquale, author of The Black Box Society: The Secret Algorithms that Control Money and Information

"Virginia Eubanks' new book shocks us with her gripping stories of the emerging surveillance state for managing poverty in the U.S. today. From single mothers on welfare, to homeless individuals on the streets, to parents suspected of child neglect, the 'digital poorhouse,' as Eubanks calls it, increasingly extends its web of surveillance from classifying to predicting the poor and their behavior, not so much to aid as to manage, discipline and punish them for the poverty society imposes on them. We learn once again that technology might be neutral but not the choices the powerful make to use it. Read this book and join with Eubanks in pushing back against the surveillance state and the injustice it sustains." —Sanford Schram, Professor of Political Science, Hunter College, CUNY; Professor of Sociology, CUNY Graduate Center

Virginia Eubanks is an Associate Professor of Political Science at the University at Albany, SUNY. She is the author of Digital Dead End: Fighting for Social Justice in the Information Age and co-editor, with Alethia Jones, of Ain’t Gonna Let Nobody Turn Me Around: Forty Years of Movement Building with Barbara Smith. Her writing about technology and social justice has appeared in Scientific American, The Nation, Harper’s, and Wired. For two decades, Eubanks has worked in community technology and economic justice movements. She lives in Troy, NY.
Loading...
or support indie stores by buying on