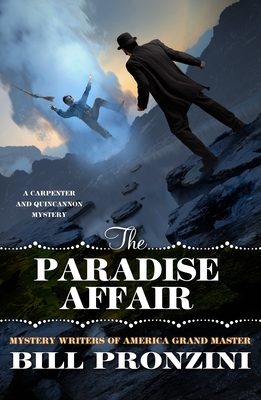 Mystery Writers of America Grand Master Bill Pronzini’s next historical mystery The Paradise Affair, perfect for fans of Peaky Blinders and The Alienist.

The latest Carpenter & Quincannon mystery: “Attractive characters, a finely tuned plot, and fascinating snippets of California history. Who could ask for more?”—Publishers Weekly on The Stolen Gold Affair

Quincannon’s pursuit of two con men who have absconded to Hawaii with a considerable sum of his employer’s assets dovetails nicely with Sabina’s vision of a second honeymoon.

But neither is wont to stay out of trouble, and Sabina inadvertently becomes involved in a locked room/dying message murder in Honolulu.


Praise For The Paradise Affair: A Carpenter and Quincannon Mystery…

“Suddenly we have a classic Golden Age mystery... It's Marlowe alternating with Poirot, an unusual and welcome mix.” - Booklist

“It’s a full, multidimensional novel crafted with a light but deft hand, providing an entertaining and thoughtful read.” - New York Journal of Books

“The Paradise Affair’ is a slim, 176-page book, but it is a full-fledged entertaining novel… Pronzini makes the highly-detailed, atmospheric tale well worth the wait.” - Lansing State Journal

“Fans of the Carpenter and Quincannon series, of which this is the ninth installment, will enjoy this book. It can be read as a standalone... I also recommend this novel to anyone interested in Hawaiian historical fiction." - The Historical Novel Society

Praise for the Carpenter and Quincannon Mystery Series

“This fast-moving novel offers plenty of fun.” - Publishers Weekly on The Bags of Tricks Affair

“Those who enjoy historical mysteries are in for a particular treat with this delightful new series featuring two intrepid detectives who solve their cases using different but equally effective methods.” - Booklist on The Bughouse Affair

“A doubly impossible crime only adds to the enjoyable plot.” - Publishers Weekly on The Bughouse Affair

“Attractive characters, a finely tuned plot, and fascinating snippets of California history. Who could ask for more?”—Publishers Weekly on The Stolen Gold Affair

Bill Pronzini's novel, Snowbound, received the Grand Prix de la Littérature Policière as the best crime novel published in France in 1988. A Wasteland of Strangers was nominated for best crime novel of 1997 by both the Mystery Writers of America and the International Crime Writers Association; in addition to six Edgar Award nominations, Pronzini has received three Shamus Awards, two for best novel, and the Lifetime Achievement Award. He lives in northern California with his wife, the crime novelist Marcia Muller.
Loading...
or support indie stores by buying on