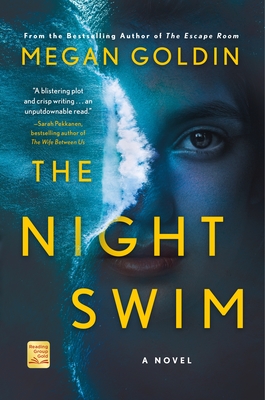 “A blistering plot and crisp writing make The Night Swim an unputdownable read.” –Sarah Pekkanen, bestselling author of The Wife Between Us

In The Night Swim, a new thriller from Megan Goldin, author of the “gripping and unforgettable” (Harlan Coben) The Escape Room, a true crime podcast host covering a controversial trial finds herself drawn deep into a small town’s dark past and a brutal crime that took place there years before.

Ever since her true-crime podcast became an overnight sensation and set an innocent man free, Rachel Krall has become a household name—and the last hope for people seeking justice. But she’s used to being recognized for her voice, not her face. Which makes it all the more unsettling when she finds a note on her car windshield, addressed to her, begging for help.

The new season of Rachel's podcast has brought her to a small town being torn apart by a devastating rape trial. A local golden boy, a swimmer destined for Olympic greatness, has been accused of raping the beloved granddaughter of the police chief. Under pressure to make Season 3 a success, Rachel throws herself into her investigation—but the mysterious letters keep coming. Someone is following her, and she won’t stop until Rachel finds out what happened to her sister twenty-five years ago. Officially, Jenny Stills tragically drowned, but the letters insist she was murdered—and when Rachel starts asking questions, nobody in town wants to answer. The past and present start to collide as Rachel uncovers startling connections between the two cases—and a revelation that will change the course of the trial and the lives of everyone involved.

Electrifying and propulsive, The Night Swim asks: What is the price of a reputation? Can a small town ever right the wrongs of its past? And what really happened to Jenny?


Praise For The Night Swim: A Novel…

Praise for The Night Swim:

“A blistering plot and crisp writing make The Night Swim an unputdownable read.” –Sarah Pekkanen, bestselling author of The Wife Between Us

Praise for The Escape Room:

“THE ESCAPE ROOM works as the ultimate locked-room mystery…Goldin excels at illustrating the pressures of a Wall Street career.” —Associated Press

"Fantastic. One of my favorite books of the year." —Lee Child

"Amazing...a thriller set in an elevator [that explores] the vast territory of people's worst natures. A nightmarish look inside ourselves. Simply riveting." —Louise Penny

“There is clearly no happy ending likely for the four colleagues trapped inside [the escape room]; but fans of JP Delany and Ruth Ware will want to be right in there with them…a nail-biting tale of a corporate team-building exercise gone horribly wrong.” —Booklist

“Riveting…[a] tale of greed and revenge set on Wall Street…Thriller fans will eagerly turn the pages to see what happens next.” —Publishers Weekly

“Cancel all your plans and call in sick; once you start reading, you'll be caught in your own escape room—the only key to freedom is turning the last page!” —Kirkus Reviews (starred)

“Smart and compelling... I devoured this novel!” —Karen Cleveland, bestselling author of Need to Know

MEGAN GOLDIN, author of THE ESCAPE ROOM and THE NIGHT SWIM, worked as a correspondent for Reuters and other media outlets where she covered war, peace, international terrorism and financial meltdowns in the Middle East and Asia. She is now based in Melbourne, Australia where she raises three sons and is a foster mum to Labrador puppies learning to be guide dogs.
Loading...
or support indie stores by buying on