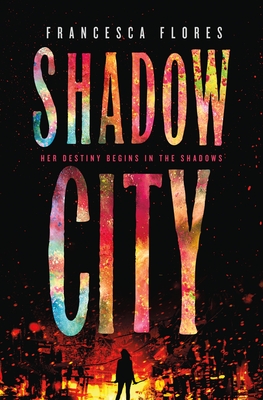 A Novel (City of Steel and Diamond #2)

Francesca Flores' Shadow City is the stunning action-packed conclusion to The City of Diamond and Steel duology.

Aina Solís has fought her way to the top of criminal ranks in the city of Kosín by wresting control of an assassin empire owned by her old boss, Kohl. She never has to fear losing her home and returning to life on the streets again—except Kohl, the man who tried to ruin her life, will do anything to get his empire back. Aina sets out to kill him before he can kill her.

But Alsane Bautix, the old army general who was banned from his seat in the government after Aina revealed his corruption, is working to take back power by destroying anyone who stands in his way. With a new civil war on the horizon and all their lives at risk, the only way for Aina to protect her home is to join up with the only other criminal more notorious than her: Kohl himself.

As Bautix’s attacks increase, Aina and Kohl work together to stop his incoming weapons shipments and his plans to take back the Tower of Steel. To defeat them both, Aina will resort to betrayal, poison, and a deadly type of magic that hasn’t been used in years.

Through narrow alleys, across train rooftops, and deep in the city’s tunnels, Aina and Kohl will test each other’s strengths and limits, each of them knowing that once Bautix is dead, they’ll still have to face each other. If she manages to kill him, she’ll finally have the freedom she wants—but it might forever mark her as his shadow in a city where only the strongest survive.


Praise For Shadow City: A Novel (City of Steel and Diamond #2)…

"Flores’ world building is as nuanced and expansive as it is shadowy; her dialogue is realistic and speedy, making the world truly feel lived in." —Booklist

"Full of action sequences that will compel readers to keep turning pages, this book is ideal for those who enjoy fast-paced stories." —School Library Journal

“An entertaining and action-driven tale of assassins and magic.” —Kirkus

"A thrilling adventure, through a vibrant city as alive as any character, about a girl willing to do anything to better her circumstances. " —Emily A. Duncan, New York Times bestselling author of Wicked Saints

“Just like the metropolis for which it’s named, Diamond City is full of shadows, secrets, and heart-stopping surprises. An absolutely electric debut!” —Crystal Smith, author of Bloodleaf

"Diamond City is a fast-paced book about a heroine I constantly found myself root for. THIS BOOK IS AMAZING." —June Hur, author of Silence of Bones

Francesca Flores is a writer, traveler and linguist. Raised in Pittsburgh, she read every fantasy book she could get her hands on and started writing her own stories at a young age. She began writing Diamond City while working as a corporate travel manager. When she's not writing or reading, Francesca enjoys traveling, dancing ballet and jazz, practicing trapeze and contortion, and visiting parks and trails around San Francisco, where she currently resides.
Loading...
or support indie stores by buying on