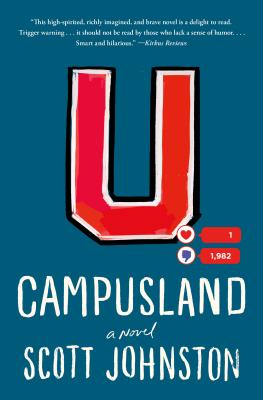 "This high-spirited, richly imagined, and brave novel is a delight to read... Smart and hilarious."
— Kirkus Reviews

Joyous, fast and funny, Scott Johnston’s Campusland is a satiric howl at today’s elite educational institutions—from safe spaces to tribal infighting to the sheer sanctimony. A wickedly delightful novel that may remind you of Tom Wolfe and David Lodge.

Her room sucks. Her closet isn’t big enough for two weeks’-worth of outfits, much less her new Rag & Bone for fall. And there’s nothing worth posting. Cruel. To Lulu Harris—It Girl-in-the-Making—her first year at the ultra-competitive Ivy-like Devon University is a dreary impediment. If she’s fabulous and no one sees it, what’s the point?

To Eph Russell, who looks and sounds like an avatar of privilege (shh!–he’s anything but) Devon is heaven. All day to think and read and linger over a Welsh rarebit at The Faculty Club, not to mention teach English 240 where he gets to discuss all his 19th Century favorites, like Mark Twain. If Eph could just get tenure, he could stay forever, but there are landmines everywhere.

In his seventh year at Devon, Red Wheeler is the alpha dog on top of Devon’s progressive hierarchy, the most woke guy on campus. But when his position is challenged, Red is forced to take measures.

Before first term is halfway finished, Lulu bungles her social cache with her clubbable upperclass peers, and is forced to reinvent herself. Shedding her designer clothes, she puts on flannel and a brand-new persona: campus victim. For Lulu to claw her way back to the top, she’ll build a pyre and roast anyone in her way.

All paths converge as privileged, marginalized, and radical students form identity alliances, sacrifice education for outrage, and push varied agendas of political correctness that drags every free thought of higher learning into the lower depths of an entitled underclass.

Campusland is a riotous, subversive and fresh read.


Praise For Campusland: A Novel…

"This high-spirited, richly imagined, and brave novel is a delight to read... Trigger warning: it should not be read by those who lack a sense of humor. Smart and hilarious."
— Kirkus Reviews

SCOTT JOHNSTON grew up in Manhattan and graduated from college in the 1980s. From there, Wall Street (Salomon Brothers of Liar's Poker fame) and a stint in Hong Kong. On the side, he opened a couple of nightclubs in New York City and wrote popular books on beer drinking and golf betting games. More recently, Johnston shifted gears and co-founded two tech startups. He lives in Westchester with his wife and three children.
Loading...
or support indie stores by buying on