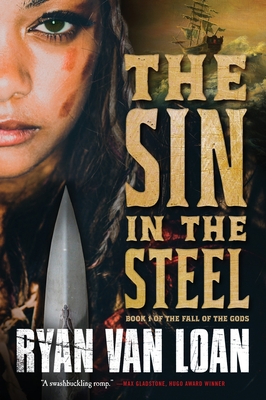 Pirates roam the seas…mages speak to each other across oceans…some gods are dead and some are merely sleeping…amazing mechanical devices change the tide of battle…and earthly wealth is concentrated in the hands of a powerful few.

Buc is determined to change all of that. The Sin in the Steel begins her quest for justice.

“If Scott Lynch wrote Pirates of the Caribbean, it’d be a lot like The Sin in the Steel.”— Tor.com

“Van Loan’s swashbuckling Watson and Holmes fantasy debut is like a wild ride on a pirate ship.”—K.B. Wagers, author of Behind the Throne

Buc: A brilliant former street-rat, not even 18 years old, with a mind that leaps from clues to conclusions in the blink of an eye.

Eld: Despite his relative youth, a military veteran with a hidden past and Buc’s partner-in-crime.

It’s been weeks since ships last returned to the magnificent island nation of Servenza with bounty from the Shattered Coast, putting the whole Empire at risk of economic collapse. Hired to investigate, Buc and Eld discover that the trade routes have become the domain of a sharp-eyed pirate queen who sinks all who defy her.

To fix things, all they have to do is sink the Widowmaker's ship.