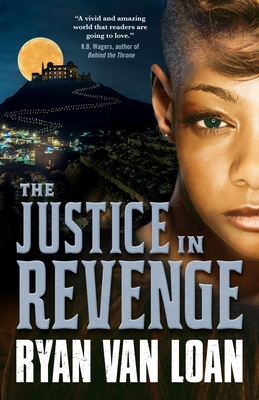 The Justice in Revenge (The Fall of the Gods #2)

Featuring boardroom intrigue, masquerade balls, gondola chases, street gangs, and shapeshifting mages, Ryan Van Loan's The Justice in Revenge continues the Fall of the Gods series as Buc and Eld turn from pirates to politics and face the deadliest mystery of their career.

The island nation of Servenza is a land of flint and steel, sail and gearwork, of gods both Dead and sleeping. It is a society where the wealthy few rule the impoverished many.

Determined to change that, former street-rat Buc, along with Eld, the ex-soldier who has been her partner in crime-solving, have claimed seats on the board of the powerful Kanados Trading Company. Buc plans to destroy the nobility from within—which is much harder than she expected.

Stymied by boardroom politics and dodging mages at every turn, Buc and Eld find a potential patron in the Doga, ruler of Servenza. The deal: by the night of the Masquerade, unmask whoever has been attempting to assassinate the Doga, thereby earning her support in the halls of power. Blow the deadline and she’ll have them deported to opposite ends of the world.

Armed with Eld’s razor-sharp sword and Buc’s even sharper intellect, the dynamic duo hit the streets just as the shadow religious conflict between the Gods begins to break into open warfare. Those closest to Buc and Eld begin turning up with their throats slit amid rumors that a hidden mastermind is behind everything that’s going wrong in Servenza.

Facing wrathful gods, hostile nobles, and a secret enemy bent on revenge, Buc and Eld will need every trick in their arsenal to survive. Luckily, extra blades aren’t the only things Buc has hidden up her sleeves.

“In the spirit of A New Hope, Buc and Eld conclude a story, but stand on a precipice of a much larger narrative that promises to blow the scope of The Sin in the Steel out of the water. If Scott Lynch wrote Pirates of the Caribbean, it’d be a lot like The Sin in the Steel.”—Tor.com

“The Sin in the Steel is a fun book with great characters and a whole lot of adventure. It gets my recommendation for fans of fantasy, and for those looking for their next great maritime read, this is it.”—FanFi Addict

RYAN VAN LOAN (he/him) served six years in the US Army Infantry, on the front lines of Afghanistan. He now works in healthcare innovation. The Sin in the Steel is his debut novel. Van Loan and his wife live in Pennsylvania.
Loading...
or
Not Currently Available for Direct Purchase