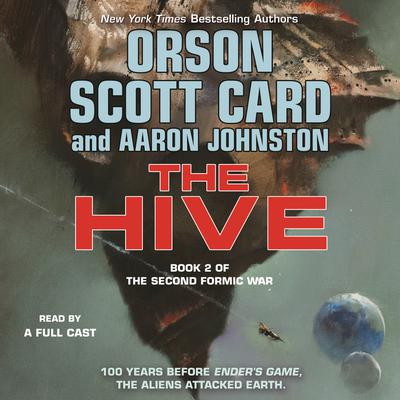 New York Times bestselling authors Orson Scott Card and Aaron Johnston return to the prequels to Ender's Game following The Swarm with The Hive, the second audiobook in the Second Formic War.

A coalition of Earth’s nations barely fought off the Formics’ first scout ship. Now it’s clear that there’s a mother-ship out on edge of the system, and the aliens are prepared to take Earth by force. Can Earth’s warring nations and corporations put aside their differences and mount an effective defense?

Ender's Game is one of the most popular and bestselling science fiction titles of all time. The Formic War series (The First Formic War and The Second Formic War) are the prequels to Ender’s story.

AARON JOHNSTON is the coauthor of the bestselling novels Earth Unaware, Earth Afire, and Earth Awakens. He was also an associate producer on the movie Ender’s Game, wherein he makes an appearance as an officer of the International Fleet. Blink and you’ll miss him. He and his wife are the parents of four children.