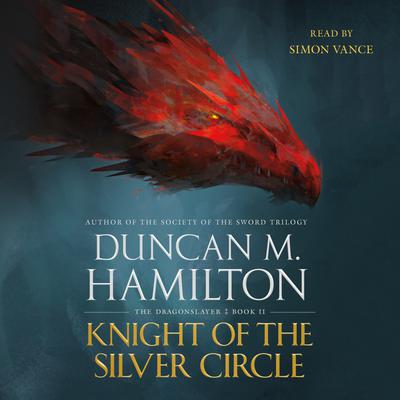 Knight of the Silver Circle (The Dragonslayer) (Digital Audiobook)

From the author of the beloved Society of Sword and Wolf of the North trilogies, Duncan M. Hamilton's Knight of the Silver Circle—the sequel adventure-packed fantasy to Dragonslayer in The Last Dragonslayer trilogy—is perfect for fans of magical beasts and unexpected heroes.

Three dragons wreak havoc throughout Mirabay—eating livestock, killing humans, and burning entire villages to ash. It was nearly impossible to kill one, using a legendary sword and the magic of the mysterious Cup; to tackle three, Guillot dal Villerauvais will need help.

The mage Solène fears having to kill again; she leaves Gill to gain greater control over her magic.

The Prince Bishop still wants Gill dead, but more than that, he wants the Cup, and he'll do whatever he has to to get it, even sending his own daughter—a talented thief and assassin—into the dragons' path.

As secrets mount on secrets and betrayals on betrayals, both Guillot and Solène face critical decisions that will settle not only their own fate but that of all Mirabaya.