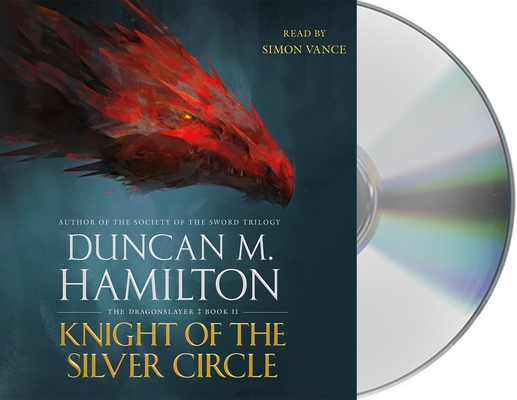 Knight of the Silver Circle (The Dragonslayer #2) (CD-Audio)

Dragons have returned after a thousand years, but greater dangers lurk in the shadows...

As the lines between enemy and ally blur, Guillot dal Villerauvais is drawn farther into the life and service he had left far behind. Solène attempts to come to terms with the great magical talent she fears is as much a curse as a blessing, while the Prince Bishop’s quest for power twists and turns, and takes on a life of its own.

With dragons to slay, and an enemy whose grip on the kingdom grows ever tighter, Gill and his comrades must fight to remain true to themselves, while standing at the precipice of a kingdom in peril.

“Successfully mixes swords, sorcery, and skullduggery with complex characters. Dumas fans will especially appreciate the faux-French setting. This is pure adventure fun with plenty for epic fantasy readers to enjoy.”—Publishers Weekly on Dragonslayer

The Dragonslayer Trilogy:
1. Dragonslayer
2. Knight of the Silver Circle
3. Servant of the Crown

Duncan M. Hamilton holds Master's Degrees in History and Law, and has practiced as a barrister. He lives in Ireland, near the sea. Hamilton’s debut novel, The Tattered Banner, first of the Society of the Sword trilogy, was named one of BuzzFeed's 12 Greatest Fantasy Books Of The Year in 2013. That book was followed by The Huntsman’s Amulet and The Telastrian Song, and by Wolf of the North, a Norse-inspired fantasy trilogy.