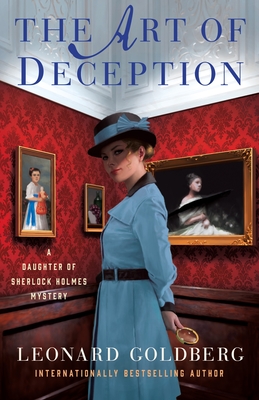 The Art of Deception

"Suspenseful and entertaining, with many twists and turns....This is one of the best Sherlock Holmes series since Laurie R. King’s Mary Russell books."—Historical Novel Society

USA Today bestselling author Leonard Goldberg returns with another puzzling case for the daughter of Sherlock Holmes to unravel in this exciting mystery, The Art of Deception, sure to be enjoyed by fans of Sherlock Holmes as well as Laurie R. King and Charles Finch.

In the west end of London, an apparently crazed individual is on the loose, breaking into art galleries and private homes to slash valuable paintings of women. Despite Scotland Yard’s best efforts, the criminal remains at large and continues on his destructive path.

When Joanna and the Watsons are called in to solve the mystery, they soon discover that although the canvases have been slashed, their backings remain pristine, with no cuts or scratches. The criminal, it seems, is no mere vandal—he's searching for something hidden behind the portraits.

Suspicion soon falls on two skilled art restorers who previously worked at the gallery where all the vandalized art was purchased. When Joanna finds the body of one in a bricked off fireplace at the gallery, the other is left as the prime suspect. But then he's discovered dead as well. Luckily, Joanna has a plan for ensnaring the criminal once and for all. But it must not fail, or more paintings—and lives—will be lost.

“Lets the reader imagine what it would be like if there was another generation of Holmes to set wrongs right.” —Mystery Scene

"Goldberg does a good job of bringing Holmes’ old stomping ground vividly to life...When it’s revealed what the assailant was after, we are not in the least disappointed." —Woman Around Town

"...the novel is written well, the plot intricate, and the solution is not obvious. Fans of Laurie R. King and Charles Finch will find this series an solid TBR (To Be Read)." —Mystery Tribune

"There's much to hold a reader's interest and the feel of the stories is very similar to Conan Doyle's writing...The plots are convoluted and twisty enough to satisfy most readers." —Gumshoe Review

"An excellent series...Joanna’s deductive abilities are the equal of her father’s...Goldberg draws a fascinating picture of the dark side of London’s art world...highly recommended." —Historical Novel Society

"Leonard Goldberg proves his skill as an author of this particular type of detective fiction time and again in this volume, with observations in the style of the great detective coming forth more than once…a most entertaining volume, featuring a complicated mystery, a clear knowledge of history, and an undeniable sense of adventure." —Green Man Review

Leonard Goldberg is the USA Today bestselling author of the Joanna Blalock medical thrillers. His novels have been translated into a dozen languages and were selections of the Book of the Month Club, French and Czech book clubs, and The Mystery Guild. They were featured as People’s “Page-Turner of the Week” and at the International Book Fair. After a long career affiliated with the UCLA Medical Center as a Clinical Professor of Medicine, he now lives on an island off the coast of Charleston, SC.
Loading...
or
Not Currently Available for Direct Purchase