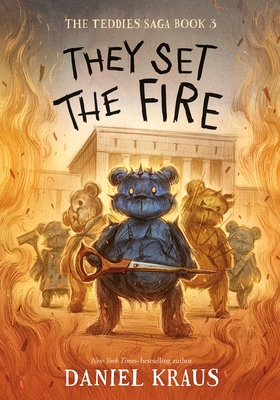 They Set the Fire

“The conclusion to The Teddies Saga is as explosive as its title. All questions are answered — some not in the ways you might expect. They Set the Fire keeps its secrets close in hand right up to the end. I could not breathe until I’d finished.”
— Kvothe Harris, Rediscovered Books, Boise, ID
View the List

At once darkly suspenseful and heartfelt with stunning spot art from illustrator Rovina Cai, this trilogy finale of New York Times-bestselling author Daniel Kraus's action-packed The Teddies Saga is perfect for fans of Victoria Schwab, Katherine Arden, and Holly Black.

After searching so long for a place to call home, the daring teddies–clever Buddy, shrewd Sunny, fearless Nothing, and wise Reginald–find few answers at the place where they were created, Furrington Industries. But with a new friend—a teddy of legend!—the teddies head back into the dangerous world to seek the secrets of their creation.

Soon the teddies find themselves surrounded by people who hated them, and discover that the founder of Furrington Industries, known as the Suit, is on trial for an unknown crime. Left reeling but determined, Buddy leads his friends–those that survive–through the protestors that line the streets outside and into the bowels of the courthouse . . . where they’ll find out the true, incendiary reason the teddies were thrown away.


Praise For They Set the Fire: The Teddies Saga, Book 3…

Praise for They Stole Our Hearts:

"This series continues to be disturbing and brilliant in equal measure." —Kirkus Reviews, Starred Review

Praise for They Threw Us Away:

“By turns swashbuckling and reflective, touching and disturbing, this existential work of fantasy and horror considers what one is willing to sacrifice when utterly lost.” —Publishers Weekly

Daniel Kraus is the author of numerous novels, including Rotters, The Death and Life of Zebulon Finch duology, Bent Heavens, and the Teddies Saga. With Guillermo del Toro, he wrote the New York Times-bestselling The Shape of Water and Trollhunters (the inspiration for the Netflix series). His novels have been Odyssey Award winners, Library Guild selections, YALSA Best Fiction for Young Adults picks, Parent’s Choice Gold Award winners, Bram Stoker finalists, and more. He lives with his wife in Chicago.

Rovina Cai us a freelance illustrator from Melbourne, Australia. She is the illustrator of The Teddies Saga.
Loading...
or support indie stores by buying on