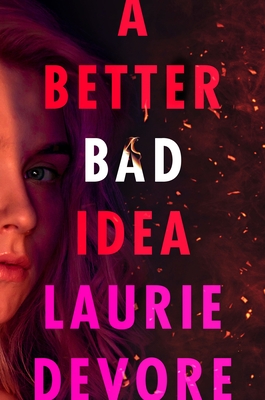 Laurie Devore's new YA novel is a searing look at a forgotten girl who has no good choices left, but one better bad idea . . .

Evelyn Peters is desperate. Desperate for a way out of McNair Falls, the dying southern town that’s held her captive since the day she was born. Desperate to protect her little sister from her mother’s terrifying and abusive boyfriend. And desperate to connect with anyone, even fallen golden boy Ashton Harper, longtime boyfriend of the girl Evelyn can never stop thinking about — beautiful, volatile, tragically dead Reid Brewer.

Until a single night sends Evelyn and Ashton on a collision course that starts something neither of them can stop. With one struck match, their whole world goes up in flames. The only thing left to do is run—but leaving McNair Falls isn’t as easy as just putting distance between here and there and some secrets refuse to stay left behind.

A reckoning is coming . . . and not everyone is getting out alive.


Praise For A Better Bad Idea…

"Devore returns with a suspenseful page-turner, told through the alternating perspectives of Evelyn and Reid, which lets readers see how each girl is desperate for love and safety while trying to find their way through life despite harsh circumstances...A heartbreaking read featuring a resilient protagonist." —Booklist

“The stakes are violently high, and these “unlikable” protagonists are extraordinarily likable. I admired the grit and guts of these girls as much as I admired Devore’s bold storytelling.” —Stephanie Perkins, New York Times-bestselling author of There’s Someone Inside Your House

"A whip-smart, propulsive gut-punch of a novel, with writing as captivating as the two girls at its center. Reading this book is definitely a good idea." —Kara Thomas, author of The Cheerleaders

"A Better Bad Idea is an anthem sung by angry girls trapped in small towns. Their song is an accounting of narrow minds and brutal fists and harms inflicted and violence to come, swelling to a crescendo that demands more than a tired recital of right and wrong. Devore invites us, unflinching, into the gray." —Kit Frick, author of I Killed Zoe Spanos

Laurie Devore was born and raised in small town South Carolina and graduated from Clemson University. She now lives and works in Chicago, where she misses the charms and contradictions of the south every day. In her spare time, she reluctantly runs marathons, watches too much TV, and works a "y’all" into every conversation. She is the author of How to Break a Boy.
Loading...
or support indie stores by buying on