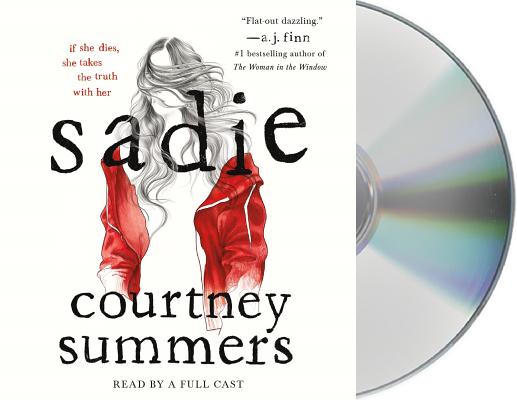 “This electrifying novel is too real to be forgettable. Sadie introduces a world where girls are hurt and forced to grow up much too soon, featuring a violent, solo road trip across the country and sleuthing methods that would appall Nancy Drew. Through a podcast like Serial, the whole world witnesses the unfurling drama of a missing girl's family left behind, and wonders what might have been done to keep this from happening in the first place. Sadie will steal your heart from the first page, and stay in your mind for the rest of your life.”
— Kaitie Radel, The Oxford Exchange, Tampa, FL
View the List

"Courtney Summers's powerful story of love, neglect, abuse, and revenge is narrated with irresistible urgency by Rebecca Soler and Dan Bittner, along with an ensemble of supporting narrators...this is a production that will not be forgotten" — AudioFile Magazine, Earphones Award Winner

An innovative audiobook production featuring more than thirty voices, Sadie explores the depth of a sister's love — poised to be the next story listeners won't be able to pause.

A missing girl on a journey of revenge and a Serial—like podcast following the clues she's left behind.

Sadie hasn't had an easy life. Growing up on her own, she's been raising her sister Mattie in an isolated small town, trying her best to provide a normal life and keep their heads above water.

But when Mattie is found dead, Sadie's entire world crumbles. After a somewhat botched police investigation, Sadie is determined to bring her sister's killer to justice and hits the road following a few meager clues to find him.

When West McCray—a radio personality working on a segment about small, forgotten towns in America—overhears Sadie's story at a local gas station, he becomes obsessed with finding the missing girl. He starts his own podcast as he tracks Sadie's journey, trying to figure out what happened, hoping to find her before it's too late.

Courtney Summers' Sadie is propulsive and harrowing and will keep listeners riveted until the last chapter.

"An electrifying thriller, taut as a bowstring. A coming-of-age tale, both gritty and sensitive. A poignant drama of love and loss. This -- all this -- is Sadie: a novel for readers of any age, and a character as indelible as a scar. Flat-out dazzling." — A.J. Finn, #1 New York Times bestselling author of The Woman in the Window


Praise For Sadie: A Novel…

"Courtney Summers's powerful story of love, neglect, abuse, and revenge is narrated with irresistible urgency by Rebecca Soler and Dan Bittner, along with an ensemble of supporting narrators...[T]his is a production that will not be forgotten." -AudioFile, Earphones Award Winner

Courtney Summers is the bestselling and critically acclaimed author of several novels for young adults, including Cracked Up to Be, All the Rage and Sadie. Her work has been released to multiple starred reviews, received numerous awards and honors--including the Edgar Award, John Spray Mystery Award, Cybils Award and Odyssey Award--and has been recognized by many library, 'Best Of' and Readers' Choice lists. She lives and writes in Canada.

Dan Bittner has narrated dozens of audio books and has starred on stage and on the screen, in movies such as Men in Black, Adventureland, and the Producers: The Movie Musical. He has also appeared onstage as Macbeth Malcolm and Sherlock Holmes in the Edinburgh Fringe Festival. He has narrated popular audio books such as The Eleventh Plague, Hero, and Forever.