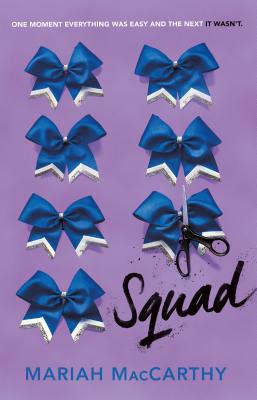 In the darkly comic Squad, a YA debut novel by award-winning playwright Mariah MacCarthy, a high school cheerleader slowly loses her best friend and the trust of her teammates after an incident at a party.

Jenna Watson is a cheerleader. And she wants you to know it’s not some Hollywood crap: they are not every guy’s fantasy. They are not the “mean girls” of Marsen High School. They’re literally just human females trying to live their lives and do a perfect toe touch. And their team is at the top of their game. They’re a family.

But all that changes when Jenna’s best friend stops talking to her. Suddenly, she’s not getting invited out with the rest of the squad. She’s always a step behind. And she has no idea why.

While grappling with post-cheer life, Jenna explores things she never allowed herself to like, including LARPing (live action role playing) and a relationship with a trans guy that feels a lot like love.

When Jenna loses the sport and the friends she’s always loved, she has to ask herself: What else is left?

"Jenna may not get everything she wants by the end of the book, but what she does get, she works for, and that makes for a satisfying journey. Squad is a short, highly concentrated blast of a book that revels in all the best and worst feelings of high school and offers the reader a charismatic and imperfect character to fall in love with. Jenna certainly won me over, and so did Squad." —NPR

"An openhearted debut that, like Jenna herself, has wonderfully surprising depth." —Booklist

"Plenty of books for young readers take on the subject of overt, aggressive bullying; this novel follows a less traveled and surprisingly substantive theme of a girl whose sense of self, forged in a pressure cooker of high expectations, is challenged in ways that cause her to misread situations and transform, momentarily, into a bully herself." —Bulletin of the Center for Children's Books

"An authentic, relatable voice . . . debut novelist MacCarthy pulls off this concoction of topics with aplomb, matter-of-factly introducing Jenna’s feelings for James and treating cheer and LARP with equal earnestness. The resolution is satisfyingly realistic . . . an affirming story." —Horn Book

"Upon finishing this book, I realized it was the first cheerleader narrative I have read that shows their lives beyond the glamour, as the featured cheerleaders create meaningful ties with Live Action Role Players (LARPers) and queer culture."—Lithium Magazine

Mariah MacCarthy is an award-winning writer, performer, and birth mother. They’ve written for BuzzFeed, Yes!magazine, LOOK magazine, The Brooklyn Rail, and others. Their plays have been performed all over the world, and the New York Times called their immersive party play Mrs. Mayfield’s Fifth-Grade Class of ’93 20-Year Reunion “a lot of fun.” They live in Astoria with their cat, Sophie. Squad is their first novel.
Loading...
or
Not Currently Available for Direct Purchase