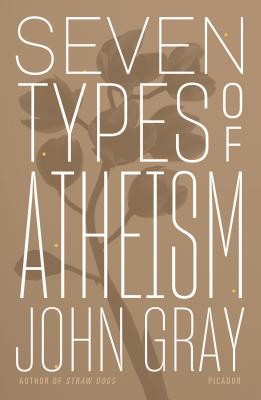 From the provocative author of Straw Dogs comes an incisive, surprising intervention in the political and scientific debate over religion and atheism

When you explore older atheisms, you will find that some of your firmest convictions—secular or religious—are highly questionable. If this prospect disturbs you, what you are looking for may be freedom from thought.

For a generation now, public debate has been corroded by a shrill, narrow derision of religion in the name of an often vaguely understood “science.” John Gray’s stimulating and enjoyable new book, Seven Types of Atheism, describes the complex, dynamic world of older atheisms, a tradition that is, he writes, in many ways intertwined with and as rich as religion itself.

Along a spectrum that ranges from the convictions of “God-haters” like the Marquis de Sade to the mysticism of Arthur Schopenhauer, from Bertrand Russell’s search for truth in mathematics to secular political religions like Jacobinism and Nazism, Gray explores the various ways great minds have attempted to understand the questions of salvation, purpose, progress, and evil. The result is a book that sheds an extraordinary light on what it is to be human.


Praise For Seven Types of Atheism…

“Elegant . . . Beautifully written and full of insights from Mr. Gray’s wide learning. It is refreshing to read a book about atheism that departs from the usual pieties of the science and religion debate today . . . Surprising as it may seem for a book on such a weighty subject, Seven Types of Atheism is very entertaining.” —Tim Crane, The Wall Street Journal

"A major unmasking defines [Gray's] approach: If one is to be an honest thinker and advance knowledge, one must expose and dismantle the web of popular ideas, convenient labels and lazy thinking that makes up the philosophical orthodoxy . . . Gray has emerged as a unique thinker precisely because he has no time for the pious lies and empty niceties of the academic establishment. He seems to have a sixth sense that helps him detect whatever is shallow, self-flattering and self-deceptive in our notions of ourselves." —Costica Bradatan, The Washington Post

"Refreshing . . . What Gray does best in Seven Types of Atheism is not only to draw distinctions among atheists but to make connections between nonbelievers and believers . . . His book offers a way forward. In it, he helps us understand how those who do not believe in God, or, for that matter, those who do, have oriented themselves in the universe." —Casey Cep, The New Yorker

"Sharpen's [Gray's] argument in various fruitful ways . . . Usefully remind[s] us that different ways of being an atheist exist." —Christopher Beha, The New York Review of Books

"Provocative, frank . . . [Gray’s] reflections on the future are insightful. Looking beyond the squabbles over science and God, Mr Gray sees the challenges implicit in abandoning the metaphysical and moral order that Christianity once provided." —The Economist

"Gray’s book is quite good fun. It’s sprightly, erudite . . . Even Gray himself, who tries hard to be a real atheist, has done something Christian and, I would say, charitable, for his fellow atheists, by running them through a compassionate but tough Inquisition." —Michael Brendan Dougerty, National Review

"[John Gray] challenges the presuppositions and positions of contemporary atheists and secular liberals in this powerful book . . . Gray alluringly invites readers to reconsider what atheism is and should be." —Publishers Weekly (starred review)

"Always erudite and convincing . . . Gray takes deep dives into history, examining the evolution of ideas in a generally accessible way. A valuable examination of one of the many fascinating junctures where religion and philosophy meet." —Michael Cart, Booklist

"A marvellously stimulating account of some major currents of post-Christian thought, in which ideas and arguments leap constantly off the page like white-hot sparks from an anvil. The dismissals are concise and often devastating; but there are also wonderfully funny details, lovingly accumulated by a wry observer of human foolishness . . . [John Gray] is one of the greatest intellectual provocateurs of our time." —Noel Malcolm, New Statesman

"This is a highly readable, fascinating book that jerks the debate on religion versus atheism right out of its crusted rut into the light of serious intellectual scrutiny." —Richard Harries, The Guardian

"Pithy and revelatory . . . Seven Types of Atheism takes us from the liberal humanism of John Stuart Mill (1806-1873), who believed that mankind was getting better without God, to the American futurist Ray Kurzweil . . . It all goes to show how varied the repertoire of ungodliness can be." —Christopher de Bellaigue, Financial Times

"Seven Types of Atheism is an impressively erudite work, ranging from the Gnostics to Joseph Conrad, St Augustine to Bertrand Russell." —Terry Eagleton, The Guardian

John Gray is the author of many critically acclaimed books, including The Silence of Animals, The Immortalization Commission, Black Mass, and Straw Dogs. A regular contributor to The New York Review of Books, he has been a professor of politics at Oxford, a visiting professor at Harvard and Yale, and a professor of European thought at the London School of Economics. He now writes full-time.
Loading...
or support indie stores by buying on
(This book is on backorder)