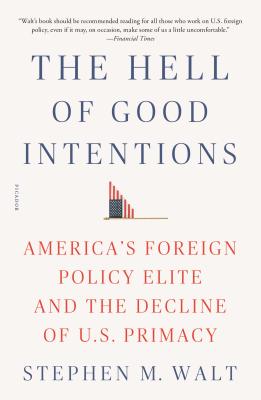 The Hell of Good Intentions

America's Foreign Policy Elite and the Decline of U.S. Primacy

From the New York Timesâ€“bestselling author Stephen M. Walt, The Hell of Good Intentions dissects the faults and foibles of recent American foreign policyâ€”explaining why it has been plagued by disasters like the â€œforever warsâ€ in Iraq and Afghanistan and outlining what can be done to fix it.

In 1992, the United States stood at the pinnacle of world power and Americans were confident that a new era of peace and prosperity was at hand. Twenty-five years later, those hopes have been dashed. Relations with Russia and China have soured, the European Union is wobbling, nationalism and populism are on the rise, and the United States is stuck in costly and pointless wars that have squandered trillions of dollars and undermined its influence around the world.

The root of this dismal record, Walt argues, is the American foreign policy establishmentâ€™s stubborn commitment to a strategy of â€œliberal hegemony.â€ Since the end of the Cold War, Republicans and Democrats alike have tried to use U.S. power to spread democracy, open markets, and other liberal values into every nook and cranny of the planet. This strategy was doomed to fail, but its proponents in the foreign policy elite were never held accountable and kept repeating the same mistakes.

Donald Trump won the presidency promising to end the misguided policies of the foreign policy â€œBlobâ€ and to pursue a wiser approach. But his erratic and impulsive style of governing, combined with a deeply flawed understanding of world politics, are making a bad situation worse. The best alternative, Walt argues, is a return to the realist strategy of â€œoffshore balancing,â€ which eschews regime change, nation-building, and other forms of global social engineering. The American people would surely welcome a more restrained foreign policy, one that allowed greater attention to problems here at home. This long-overdue shift will require abandoning the futile quest for liberal hegemony and building a foreign policy establishment with a more realistic view of American power.


Praise For The Hell of Good Intentions: America's Foreign Policy Elite and the Decline of U.S. Primacy…

"The Trump-era establishment narrative ignores the fact that, despite his campaign rhetoric (â€œour foreign policy is a complete and total disasterâ€; â€œweâ€™re rebuilding other countries while weakening our ownâ€), the current president has not veered very far from the playbook of the bipartisan foreign-policy elite. Stephen Waltâ€™s The Hell of Good Intentions helps explains why . . . Waltâ€™s portrait of the Blob and those who inhabit it is nothing short of damning." â€”James Carden, The Nation

"Walt's book should be recommended reading for all those who work on US foreign policy, even if it may, on occasion, make some of us a little uncomfortable." â€”Financial Times

"Between a president bent on ripping up the international liberal order and a foreign policy establishment determined to reestablish â€˜liberal hegemony,' Stephen Walt has laid out a real alternative, a foreign policy that rebuilds America at home and promotes peace through restraint and alliance building abroad. Itâ€™s a brilliant analysis that will define debate for years to come.â€ â€”Michael Ignatieff, President and Rector, Central European University

â€œIf we are to have a healthy and honest debate about the future of U.S. foreign policyâ€”as increasingly we mustâ€”we need more books like The Hell of Good Intentions. Steve Walt has written an engaging and long overdue critique of the widely accepted canon. Regardless of whether you agree with his prescription, this is essential reading for those who care about our role in the world.â€ â€”Paul B. Stares, General John W. Vessey Senior Fellow, Council on Foreign Relations

"This book will wake you up, shake you up, and leave you smarter. Walt takes aim at the bipartisan verities of Washingtonâ€™s foreign policy establishment, skewering its conformity, self-righteousness, and shared illusionsâ€”and offers his own thoughtful prescription for a humbler, wiser and more effective US foreign policy. Members of the US foreign policy establishment wonâ€™t like this book. They should read it anyway. The fate of the nation may depend on it." â€”Rosa Brooks, Associate Dean for Graduate Programs, Georgetown University Law Center, author of How Everything Became War and the Military Became Everything

"Very controversial, expertly argued and engagingly written, this book will spark an indispensable debate about how to ensure that Americaâ€™s foreign policy is aligned to Americaâ€™s interests. A must read." â€”MoisÃ©s NaÃ­m, Distinguished Fellow, Carnegie Endowment for International Peace, author of The End of Power

"Anyone who wants to understand why post-Cold War U.S. foreign policy has been plagued by disasters like the Iraq War should read Steve Waltâ€™s brilliant new book. He shows with characteristic flair and sophistication that the taproot of the problem is Americaâ€™s foreign policy elite, which is suffused with misguided ideas about international politics." â€”John J. Mearsheimer, R. Wendell Harrison Distinguished Service Professor of Political Science, University of Chicago

"Much American foreign policy is the product of a suffocating consensus, notwithstanding the partisan combat that also characterizes American politics. Stephen Walt provides an illuminating and well-researched look at that consensus and persuasively explains how it keeps pushing the United States into the same costly mistakes abroad." â€”Paul R. Pillar, Non-Resident Senior Fellow, Georgetown University Center for Security Studies

"Sadly, Stephen M. Walt is right: the American foreign policy establishment has failed America. Americaâ€™s standing in the world has sunk. All of us, both Americans and non-Americans, should read this book to help the country regain its once constructive global leadership. A must-read for decision-makers around the world." â€”Kishore Mahbubani, Professor, National University of Singapore, author of Has the West Lost It?

Stephen M. Walt is the Belfer Professor of International Affairs at the John F. Kennedy School of Government at Harvard University, and was academic dean of the Kennedy School from 2002 to 2006. He is the author of Taming American Power: The Global Response to U.S. Primacy, among other books.
Loading...
or support indie stores by buying on