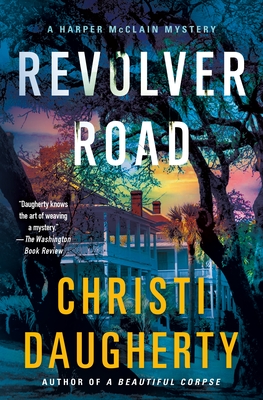 Crime reporter Harper McClain is back on the beat when a troubled musician vanishes in Christi Daugherty’s Revolver Road.

Even in the chill of February, no place touches Harper McClain’s heart like Savannah. She should be walking beneath the historic city’s towering oaks, surrounded by graceful mansions. Instead, she’s hiding miles away on Tybee Island after a mysterious voice on the phone warned her that someone wanted her dead. The call was too specific to ignore. The caller knew everything about her. But that was months ago, and she’s getting tired of being scared.

Her only escape is her work at the newspaper, where the hottest story in town is the disappearance of Xavier Rayne. The singer had a hit album on his hands, and was about to go on tour, but then he walked out of his beachfront home and vanished. The police believe he drowned, but Harper suspects his disappearance may be more ominous than that. Something doesn’t feel right about it.

His bandmates and actress girlfriend say he’s run away before. They expect him to come home. Until a body washes up with two bullet holes in it. Now everyone in Rayne’s life is a suspect. As Harper digs deeper into the case, though, the threats against her own life return. The phone call she received was very real. A killer from her past is coming for her.

Now she must solve two murders, or end up dying on Revolver Road…

As a newspaper reporter, Christi Daugherty covered her first murder at the age of 22. There would be many more over the subsequent years when she worked as a journalist in cities including Savannah, Baton Rouge, and New Orleans. Now a novelist, she lives in the south of England. She is the author of The Echo Killing and A Beautiful Corpse.
Loading...
or
Not Currently Available for Direct Purchase