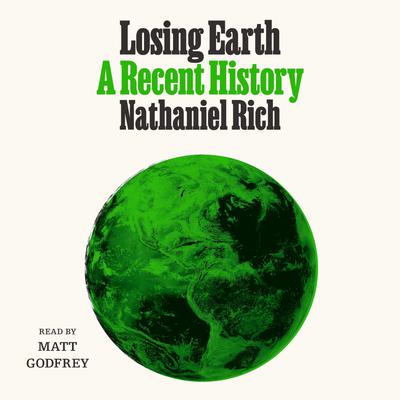 "This is an important, infuriating, enlightening, engaging, and engrossing audiobook...Anyone wishing to learn how the world has gotten to the point of almost inevitable climate disaster will be well served by listening to Godfrey's measured but emphatic reading." — AudioFile Magazine

Now expanded into book form, Losing Earth tells the human story of climate change in even richer, more intimate terms. It reveals, in previously unreported detail, the birth of climate denialism and the genesis of the fossil fuel industry’s coordinated effort to thwart climate policy through misinformation propaganda and political influence. The audiobook carries the story into the present day, wrestling with the long shadow of our past failures and asking crucial questions about how we make sense of our past, our future, and ourselves.

Nathaniel Rich is the author of three novels: King Zeno, Odds Against Tomorrow, and The Mayor’s Tongue. He is a contributing writer at The New York Times Magazine and his essays have appeared in The New York Review of Books, The Atlantic, Harper’s Magazine, Rolling Stone, and The Daily Beast. He lives in New Orleans.