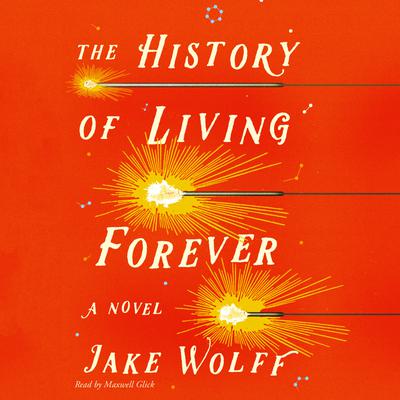 The morning after the death of his first love, Conrad Aybinder receives a bequest. Sammy Tampari was Conrad’s lover. He was his teacher. And, it turns out, he was not just a chemist, but an alchemist, searching for a mythic elixir of life. Sammy’s death was sudden, yet he somehow managed to leave twenty years’ worth of his notebooks and a storage locker full of expensive, sometimes baffling equipment in the hands of his star student. The notebooks contain cryptic “recipes,” but no instructions; they tell his life story, but only hint at what might have caused his death. And Sammy’s research is littered with his favorite teaching question: What’s missing?

As Conrad pieces together the solution, he finds he is not the only one to suspect that Sammy succeeded in his quest. And if he wants to save his father from a mysterious illness, Conrad will have to make some very difficult choices.

A globe-trotting, century-spanning adventure story, Jake Wolff’s The History of Living Forever takes us from Maine to Romania to Easter Island and introduces a cast of unforgettable characters—drug kingpins, Big Pharma flunkies, centenarians, boy geniuses, and even a group of immortalists masquerading as coin collectors. It takes us deep into the mysteries of life—from first love to first heartbreak, from the long pall of grief to the irreconcilable loneliness of depression to the possibility of medical miracles, from coming of age to coming out. Hilarious, haunting, heart-busting, life-affirming, it asks each of us one of life’s essential questions: How far would you go for someone you love?

Jake Wolff received an MFA in fiction from the University of Wisconsin–Madison and a Ph.D. in creative writing from Florida State University. His stories and essays have appeared in journals such as Tin House, One Story, and American Short Fiction. He lives in Orlando, Florida, where he is an assistant professor of English at the University of Central Florida.