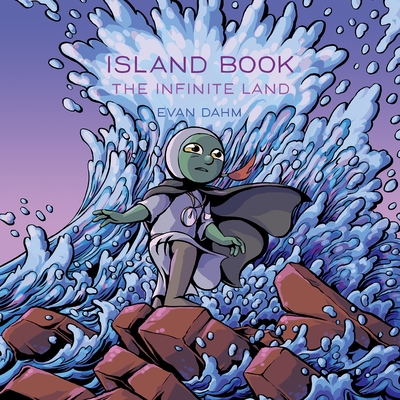 After their quest to find the Monster, Sola and her friends have gone down separate paths. Sola spends her days on the open seas while Hunder stays close to home as the chief of the unified Sun and Fortress Islands. And Wick? Well . . . it’s almost as if he’s become a ghost.

Then their world is thrown into chaos when Alef, the captain of one of Hunder’s ships, brings news of a massive island—a continent—that he says the Sun and Fortress islanders are destined to claim for their own. Alef and Hunder launch an expedition that threatens to bring death and destruction to any who stand in their way. Sola must make a choice—step aside and allow other islanders to die, or risk her own life in order to stop her friend.

"Bright, well-defined panels feature action set against backdrops of sea and sky that are stunning in their visual impact. ...A dazzling mix of excitement and philosophical adventure."—Kirkus, starred review

Evan Dahm is a cartoonist living in Brooklyn, NY with his spouse and their small dog. He’s from North Carolina and graduated from Appalachian State University in 2009. Since 2006, he’s been creating and self-publishing comics online and in print, including the fantasy-adventure graphic novels Rice Boy, Order of Tales, and the award-winning fantasy-biographical epic Vattu. He’s also illustrated and designed editions of The Wonderful Wizard of Oz and Moby-Dick. Island Book is his first work with a major publisher.
Loading...
or support indie stores by buying on