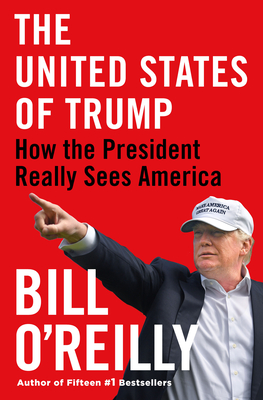 The United States of Trump

How the President Really Sees America

A rare, insider’s look at the life of Donald Trump from Bill O'Reilly, the bestselling author of the Killing series, based on exclusive interview material and deep research

Readers around the world have been enthralled by journalist and New York Times bestselling author Bill O’Reilly’s Killing series—riveting works of nonfiction that explore the most famous events in history. Now, O’Reilly turns his razor-sharp observations to his most compelling subject thus far—President Donald J. Trump. In this thrilling narrative, O’Reilly blends primary, never-before-released interview material with a history that recounts Trump’s childhood and family and the factors from his life and career that forged the worldview that the president of the United States has taken to the White House.

Not a partisan pro-Trump or anti-Trump book, this is an up-to-the-minute, intimate view of the man and his sphere of influence—of “how Donald Trump’s view of America was formed, and how it has changed since becoming the most powerful person in the world”— from a writer who has known the president for thirty years. This is an unprecedented, gripping account of the life of a sitting president as he makes history.

As the author will tell you, “If you want some insight into the most unlikely political phenomenon of our lifetimes, you’ll get it here.”

BILL O’REILLY’s success in broadcasting and publishing is unmatched. He was the iconic anchor of The O'Reilly Factor, the highest-rated cable news broadcast in the nation for 16 consecutive years. His website BillOReilly.com is followed by millions all over the world, his No Spin News is broadcast weekday nights at 8 and 11 (ET) on The First TV, and his O’Reilly Update is heard weekdays on more than 225 radio stations across the country. He has authored an astonishing seventeen #1 bestsellers; his historical Killing series is the bestselling nonfiction series of all time, with over 18 million books in print. O’Reilly has received a number of journalism accolades, including three Emmys and two Emmy nominations. He holds a History degree from Marist College, a master's degree in Broadcast Journalism from Boston University, and a master’s degree from Harvard’s John F. Kennedy School of Government. O’Reilly lives on Long Island where he was raised. His philanthropic enterprises have raised tens of millions for people in need and wounded American veterans.
Loading...
or support indie stores by buying on