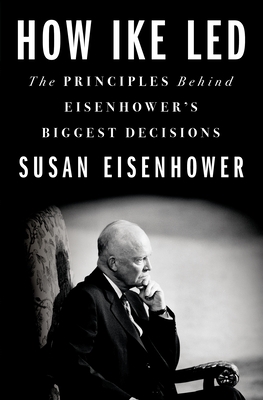 The Principles Behind Eisenhower's Biggest Decisions

How Dwight D. Eisenhower led America through a transformational time—by a DC policy strategist, security expert and his granddaughter.

Few people have made decisions as momentous as Eisenhower, nor has one person had to make such a varied range of them. From D-Day to Little Rock, from the Korean War to Cold War crises, from the Red Scare to the Missile Gap controversies, Ike was able to give our country eight years of peace and prosperity by relying on a core set of principles. These were informed by his heritage and upbringing, as well as his strong character and his personal discipline, but he also avoided making himself the center of things. He was a man of judgment, and steadying force. He sought national unity, by pursuing a course he called the "Middle Way" that tried to make winners on both sides of any issue.

Ike was a strategic, not an operational leader, who relied on a rigorous pursuit of the facts for decision-making. His talent for envisioning a whole, especially in the context of the long game, and his ability to see causes and various consequences, explains his success as Allied Commander and as President. After making a decision, he made himself accountable for it, recognizing that personal responsibility is the bedrock of sound principles.

Susan Eisenhower's How Ike Led shows us not just what a great American did, but why—and what we can learn from him today.


Praise For How Ike Led: The Principles Behind Eisenhower's Biggest Decisions…

“A well-written reflection on one of the most significant American presidents. The compelling substance of How Ike Led is enhanced by the author’s sensitive style. It brings one of America’s most remarkable public figures into lasting focus.” —Henry A. Kissinger

"[Susan Eisenhower] lays bare the essence of her grandfather’s leadership in war and peace—his singular devotion to the unity and security of the American people and the nation’s allies.” —Wall Street Journal

"Susan Eisenhower's How Ike Led distills from her grandfather's life the enduring qualities of successful leadership. Those qualities -- dedication to duty, sincerity, fairness, optimism, humility, patience and restraint, moderation and accountability -- are illuminated through anecdotes both moving and entertaining from Dwight Eisenhower's decades of unparalleled service to America. It is an inspirational book with lessons highly relevant and desperately needed for current and aspiring leaders, especially those in public life."
—Robert M. Gates, U.S. Secretary of Defense 2006-2011

“Susan Eisenhower’s How Ike Led is not only a moving account of her grandfather’s major decisions, but an astute and timely reminder that his virtues—good judgment, taking full responsibility, self-control, courage and devotion to the truth, however uncomfortable—remain the lodestar of leadership in peace and in war, and of his own long, remarkable career of public service as a general and president. I had a wonderful time reading it—and there could not be a better time to read this book.”
—Michael Korda, author of Ike and Hero

“Granddaughter of President Dwight ‘Ike’ Eisenhower and leader of Gettysburg College’s Eisenhower Institute, [Susan Eisenhower] has pored through the record of her grandfather’s career and distilled what made him a great leader both on the battlefield and in government. ... A direct witness to Ike’s later years, the author draws on memories of her grandfather, and these highly personal anecdotes supplement her research. Armchair historians will treasure this book.” —Booklist

“How Ike Led is a powerful addition to a leader’s bookshelf. The author’s unique perspective as Eisenhower’s granddaughter offers the reader personal anecdotes and insights on strategic thought and character not found in previously published biographies of Eisenhower. To understand Dwight Eisenhower, read Susan Eisenhower.” — Association Of The United States Army

“This riveting account of Dwight David Eisenhower’s brilliant World War II leadership and his visionary Presidential accomplishments sets a new benchmark for excellence in the study of strategic leadership. Once again Susan Eisenhower brings her extraordinary storytelling skills to bear in this compelling history of one of America’s most gifted leaders of character and courage; the result is an authoritative and revealing perspective on “Ike’s” unparalleled role in shaping his era and our own.”
—Lieutenant General David Huntoon, US Army (Retired), former Superintendent of the US Military Academy at West Point

"An eloquent, compelling tribute to our 34th president, lovingly—but not uncritically—penned by the author’s granddaughter. This eminently readable book is laced with personal anecdotes and insights from his friends and closest advisors. Although Eisenhower’s life and presidency have been the subject of abundant scholarly study, the family details and flowing style of How Ike Led make a special contribution to our understanding of him as a person and as a leader." —Susan Hockfield, President Emerita, MIT

“How Ike Led takes us inside the mind of one of the towering figures of the 20th-century, indeed one of our nation’s most accomplished and yet still misunderstood presidents. Our host on this journey, Susan Eisenhower, one of the revered general’s granddaughters, uses personal stories and memorable anecdotes to provide a deeply-moving insight into one of the master-strategists of our time. As her book makes clear, Eisenhower’s leadership and his sublimation of ego stand in stark contrast to the qualities of far too many elected officials today. Read it with pride and be reminded of the virtues that defeated Nazism and contributed mightily to the nation that we Americans too often take for granted.”
—Robert Edsel, author of Monuments Men: Allied Heroes, Nazi Thieves and the Greatest Treasure Hunt in History

"Susan Eisenhower has given us an insightful and inspiring profile of Ike’s brand of leadership; his authority was grounded in his unshakable integrity and deep commitment to the service of others. Drawing on extensive research and her own personal experience, Eisenhower paints a 20th century portrait that is even more relevant in the 21st century. This book calls us to remember how essential true leadership is for American democracy to thrive. —Frederick M. Lawrence, Secretary and CEO, The Phi Beta Kappa Society and Distinguished Lecturer, Georgetown University Law Center

"This remarkable book is a priceless gift to people young and old, seeking the secret of America's past success: wise and selfless leadership; written by an expert on the life, times, and personal values of a man called Ike." —Ambassador Richard T. McCormack, Former Executive Vice Chairman, Bank of America and former undersecretary of state

"Susan Eisenhower’s unique insights into the values, vision, and courage of our 34th president and unmatched command of the history of his era deepen and at times transform our understanding of the events that shaped the modern world, from D-Day to Little Rock, from Suez to Sputnik...Ike’s humanity as well as his wisdom shine through as he steered the Nation to peace and prosperity...A must read for anyone who cares about America’s past, or its future."
—Daniel B. Poneman, CEO of Centrus Energy Corporation and former Deputy Secretary of Energy

"A tour de force by Susan Eisenhower with rare, unprecedented insights which only this author could deliver. Insights that combine the public persona of General then President Eisenhower with first-hand accounts from Ike’s family, friends and personal staff providing new dimensions for our collective understanding of America’s foremost strategic leader of the 20th Century. By dissecting the anatomy of his most momentous and impactful decisions, she reveals a leader who not only possessed abundant strategic understanding, intellect, moral courage and emotional intelligence but who was also humble, respectful, values-based and self-aware in how he implemented those decisions. How Ike Led is not only an exceptional work of history, more importantly it provides the model for all who are or aspire to be our national leaders as we navigate the challenges of the 21st Century.
--General John Nicholson, US Army Retired, Former Commander NATO Resolute Support and US Forces Afghanistan

“Susan Eisenhower’s skillful melding of personal experiences and erudite observations from scholars and contemporary observers give us as good a picture of Ike as we have ever had.”
--David Nichols, author of Ike and McCarthy, Eisenhower 1956, and A Matter of Justice

SUSAN EISENHOWER, one of Ike's four grandchildren, is a consultant, author, and a Washington, DC-based policy strategist with many decades of work on national security issues. She lectures widely on such topics, including strategic leadership.
Loading...
or support indie stores by buying on