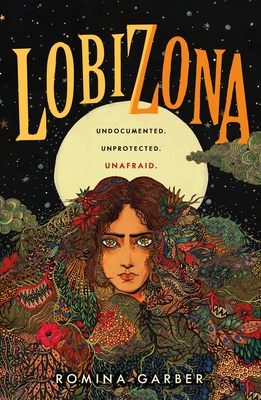 “Move over Twilight, there are new werewolves in town! Romina Garber’s Lobizona is a wonderful blend of Argentinian witch and werewolf lore, a magical school setting, and contemporary commentary on immigrant justice. Its unique magic system acts as the perfect setting to explore themes of belonging, love, family legacy, and what it means when we call a person illegal. This richly told story will entice young readers who’ve enjoyed the Harry Potter or Shadow and Bone series. I can’t wait for readers to connect with this epic story!”
— Julia DeVarti, Literati Bookstore, Ann Arbor, MI
View the List

"Garber’s gorgeous novel combines the wonder of a Hogwarts-style magic school with the Twilight-esque dynamics of a hidden magical species that has strict rules about interacting with the human world." - BOOKLIST (Starred Review)

Some people ARE illegal.

Both of these statements are false.

Manuela Azul has been crammed into an existence that feels too small for her. As an undocumented immigrant who's on the run from her father's Argentine crime-family, Manu is confined to a small apartment and a small life in Miami, Florida.

Until Manu's protective bubble is shattered.

Her surrogate grandmother is attacked, lifelong lies are exposed, and her mother is arrested by ICE. Without a home, without answers, and finally without shackles, Manu investigates the only clue she has about her past—a mysterious "Z" emblem—which leads her to a secret world buried within our own. A world connected to her dead father and his criminal past. A world straight out of Argentine folklore, where the seventh consecutive daughter is born a bruja and the seventh consecutive son is a lobizón, a werewolf. A world where her unusual eyes allow her to belong.

As Manu uncovers her own story and traces her real heritage all the way back to a cursed city in Argentina, she learns it's not just her U.S. residency that's illegal. . . .it’s her entire existence.

“With vivid characters that take on a life of their own, beautiful details that peel back the curtain on Romina's Argentinian heritage, and cutting prose Romina Garber crafts a timely tale of identity and adventure.”–Tomi Adeyemi New York Times bestselling author of Children of Blood and Bone


Praise For Lobizona: A Novel (Wolves of No World #1)…

An Audible and Google Play Best Book of 2020

"Garber’s gorgeous novel combines the wonder of a Hogwarts-style magic school with the Twilight-esque dynamics of a hidden magical species that has strict rules about interacting with the human world." - BOOKLIST (Starred Review)

"This genre-bending mashup will win over fans of swoon-y, suspenseful paranormal dramas." - KIRKUS

"A politically exigent #ownvoices novel...with a rich exploration of hybrid identities, it's an astute and absorbing piece of magical realism." - Bulletin of the Center for Children's Books

"Steeped in Argentine folklore of lobizonas (werewolves) and brujas (witches), this is such an important story to tell, and it’s also an engrossing read. - BUZZFEED

"Lobizona by Romina Garber is the kind of book that digs its claws into you and leaves marks so you don’t forget what you just experienced...With Lobizona, Romina Garber is poised to become a strong literary voice of this era." - THE NERD DAILY

"Romina Garber's Lobizona is a young-adult fantasy novel of Argentinian folklore that doesn’t pull punches highlighting the plight of many undocumented immigrants in the United States." - USA TODAY

"Garber, who also writes under Romina Russell (Zodiac), uses exquisite prose to build an elaborate, gorgeous world that is likely to appeal to fans of Anna-Marie McLemore and Elana K. Arnold. Manu's exploration of her identity--both in Miami and elsewhere--reflects how Latinx communities have historically been and continue to be affected by U.S. politics. From the book's harrowing opening, Manu is set on a fantastical journey of self-discovery that subverts and reinterprets familiar fairytale tropes." - SHELF AWARENESS

"Lobizona promises a fresh alternative to the werewolf myth, as well as an unflinching exploration of what it means to be the unwanted Other in worlds both real and magical." - TOR.COM

“With vivid characters that take on a life of their own, beautiful details that peel back the curtain on Romina's Argentinian heritage, and cutting prose that shines a light on the difficulties of being the ‘other’ in America today, Romina Garber crafts a timely tale of identity and adventure that every teenager should read.”
–Tomi Adeyemi New York Times bestselling author of Children of Blood and Bone

“Romina Garber has created an enthralling young adult fantasy led by an unforgettable Latinx character Manu. In Manu we find a young girl who not only must contend with the injustice of being undocumented she also discovers a hidden world that may explain her very existence. I fell in love with this world where wolves, witches and magic thrives, all in a rich Latinx setting! Lobizona will surely place Garber alongside the Harry Potters of the world” –Lilliam Rivera, author of Dealing in Dreams and The Education of Margot Sanchez

ROMINA GARBER (pen name of Romina Russell) is a New York Times and international bestselling author. Originally from Argentina, she landed her first writing gig as a teen—a weekly column for the Miami Herald that was later nationally syndicated—and she hasn’t stopped writing since. Her books include Lobizona and the Zodiac quartet. Romina is a graduate of Harvard College and a Virgo to the core.
Loading...
or support indie stores by buying on