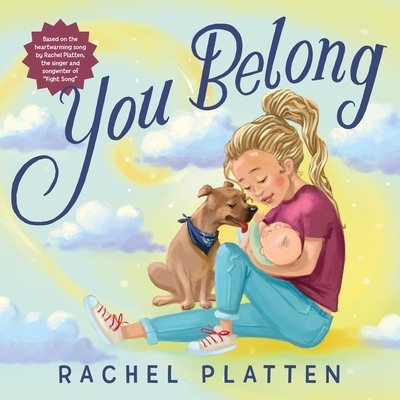 A warm and loving message of welcome to newborn babies, You Belong--a picture book from singer-songwriter Rachel Platten and illustrator Marcin Piwowarski--will touch the hearts of everyone.

I’m patiently waiting for you to arrive
I want to meet you so much I could cry
I wonder whose hands and whose eyes you will have?
I wonder if you’re going to smile like your dad?
Nothing you ever do will be so wrong
You belong, you belong.

Rachel Platten has written soft and sweet words of welcome to new babies. It explores the myriad of emotions expectant parents experience. The dreamy illustrations capture the magic and wonder a parent has for their precious one before they arrive, and the person they envision as they grow up in the world.

Born in New York City and raised in Massachusetts, Rachel Platten is an Emmy Award winner, multi-platinum selling recording artist. Few artists in the past decade have struck a chord of hope and resilience like she did with her empowering hit “Fight Song.” Rachel topped countless charts worldwide, with her major label debut album Wildfire which also included the platinum Billboard Hot 100 hit, “Stand By You.” In 2017, Rachel released her second full-length album for Columbia Records called Waves. Pregnant with her first child, Rachel released "You Belong" a song dedicated to her daughter at the end of 2018, which has inspired expectant and new mothers everywhere.

Marcin Piwowarski was born in 1972 and pursued both international and domestic career in painting and children illustration. He is self-taught in traditional as well as digital illustration and managed to make over one thousand books during his twenty-year artistic journey, including You Belong, Give Us a Smile, Cinderella, and The Spooky Express. His artwork is mostly inspired by nature, daily life and music. He likes to mix magical and mysterious ambiance with down to earth elements of every-day reality, which results in thrilling, but comprehensible pieces which are loved by children and adults equally. As a single father of three kids, he understands what to include in his art for it to be adored and eye-catching. Despite all of that, the most important about his persona is, as he says, that he prefers tea over coffee.
Loading...
or support indie stores by buying on