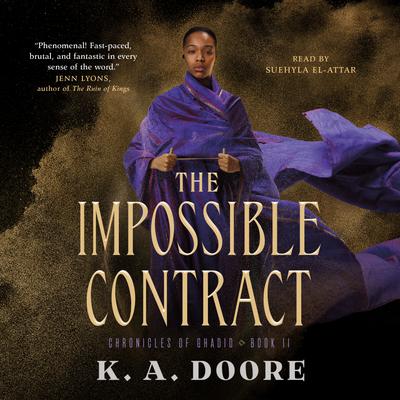 The Impossible Contract is the second audiobook in K. A. Doore's high fantasy adventure series the Chronicles of Ghadid, where a determined assassin travels to the heart of the Empire in pursuit of a powerful mark, for fans of Robin Hobb, Sarah J. Maas, and S. A. Chakraborty

K. A. DOORE was born in Florida but has since lived in Washington, Arizona, and Germany. She has a BA in Classics and Foreign Languages and an enduring fascination with linguistics. These days she writes fantasy in mid-Michigan and develops online trainings for child welfare professionals. The Impossible Contract is the second novel in the Chronicles of Ghadid trilogy, following her debut The Perfect Assassin.