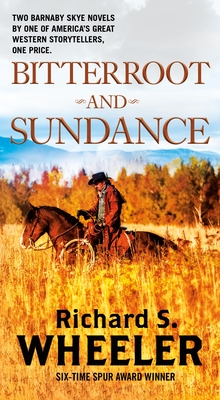 Bitterroot
Mountain man Barnaby Skye agrees to take a Quaker missionary, Dr. William Penn Sitgreaves, along with his wife Abigail and his party, to Owen’s Fort in the Bitterroot Valley of western Montana. There, the Quakers intend to begin a mission to the Native Americans. Skye quickly discovers that Dr. Sitgreaves, far from being a soft man, has a backbone of steel—and he’ll need it to found a mission in the wilds.

Sundance
Along the Oregon Trail, a war party of Lakota Sioux rob Con Brann of all that he holds dear—most devastatingly, his daughter Hester. Barnaby Skye endeavors to help Brann, even as the Sioux, 10,000 strong, gather to celebrate their ancient Sun Dance ritual, praying for vengeance upon their enemies—including Skye. Honor-bound to rescue the young girl, Skye must infiltrate their sacred ceremony…even though discovery means horrible death.

“Skye is one of the most memorable figures in Western fiction since Max Brand’s Destry.”
—Tulsa World

“Wheeler is among the best of [the] modern Western novelists.”
—Rocky Mountain News

“Wheeler is a master storyteller whose many tales of the Westward Movement . . . weave fact, fiction, and folklore into pure entertainment.”
—Library Journal