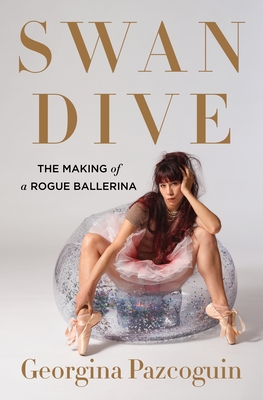 The Making of a Rogue Ballerina

In this love letter to the art of dance and the sport that has been her livelihood, NYCB’s first Asian American female soloist Georgina Pazcoguin lays bare her unfiltered story of leaving small-town Pennsylvania for New York City and training amid the unique demands of being a hybrid professional athlete/artist, all before finishing high school. She pitches us into the fascinating, whirling shoes of dancers in one of the most revered ballet companies in the world with an unapologetic sense of humor about the cutthroat, survival-of-the-fittest mentality at NYCB. Some swan dives are literal: even in the ballet, there are plenty of face-plants, backstage fights, late-night parties, and raucous company bonding sessions.

Rocked by scandal in the wake of the #MeToo movement, NYCB sits at an inflection point, inching toward progress in a strictly traditional culture, and Pazcoguin doesn’t shy away from ballet’s dark side. She continues to be one of the few dancers openly speaking up against the sexual harassment, mental abuse, and racism that in the past went unrecognized or was tacitly accepted as par for the course—all of which she has painfully experienced firsthand.

Tying together Pazcoguin’s fight for equality in the ballet with her infectious and deeply moving passion for her craft, Swan Dive is a page-turning, one-of-a-kind account that guarantees you'll never view a ballerina or a ballet the same way again.


Praise For Swan Dive: The Making of a Rogue Ballerina…

"A page-turner."
—The New York Times

“Witty, sobering, hell-raising. . . . Pazcoguin exposes more turmoil at New York City Ballet than any fictional melodrama could hope to match. Good luck trying to look away. . . . There are enough real-life crises in this brisk, often laugh-out-loud tell-all to light the imagination of any cable TV script writer. But with her string of criticisms and even in her crazy-funny asides, Pazcoguin has a serious point to make about the ballet world."
—The Washington Post

"As no-holds-barred as [Pazcoguin's] dancing. . . . Come for the unfiltered peek behind the curtain, stay for the accessible, often hilarious writing."
—Dance Magazine

"A funny, poignant, and shocking read. . . . [Pazcoguin] punctures, with enormous glee, the stereotype of the ballet dancer as an elegant, ethereal being."
—The Guardian

“Swan Dive is to ballet what Anthony Bourdain’s Kitchen Confidential was to restaurants, a chance to go behind the serene front of house to the sweaty, foul-mouthed, psychofrenzy backstage.”
—Sunday Times (UK)

"Explosive. . . . The lively pages are filled with colloquialisms (her school is 'prestigious AF') as well as juicy sex, drugs, and rock 'n' roll tales."
—The Daily Telegraph (UK)

"While the juicy details of beautiful people behaving badly are beguiling, it’s Pazcoguin’s unsparing criticism of the industry that begs an encore. This is potent stuff.”
—Publishers Weekly

"Pazcoguin writes with astounding passion about her achievements, and her prose is enchanting as she describes finally being comfortable in her own skin. Vulnerable, raw, and full of grit, this is the story of a woman who has been broken yet clawed her way to victory. . . . A personal tale of darkness, passion, and euphoric triumph."
—Library Journal (starred review)

"In her brisk, spirited debut memoir, [Pazcoguin] recounts her experiences in the competitive, hierarchal ballet world. . . . A lively chronicle of dedication and joy."
—Kirkus Reviews

"Always arresting onstage, Georgina Pazcoguin gives us a take on the ballet world that is witty and from the heart. An eye-opening read."
—Mikhail Baryshnikov

“A thoroughly captivating read. Determination and passion are the cornerstones of Georgina’s magic onstage and off, and her humor and wit make this peek behind the curtain like no other dance memoir. Her courage in the face of adversity is to be admired.”
—Chita Rivera

“Georgina has led quite the journey to become the woman she is today. She exemplifies a natural, nostalgic showgirl attitude combined with the sensitivity and precision of a life in ballet.”
—Zac Posen

“This is a fearless book written with a courageous, blazing spirit. Georgina’s story compels you to look at yours as fiercely as she examines hers.”
—Jose Antonio Vargas, founder of Define American and author of Dear America: Notes of an Undocumented Citizen

“Georgina Pazcoguin has brought the glories of ballet and technique into a new light. She is refinement and explosion wrapped into a woman whose personal style is ready for the runway. She can captivate an opera house as easily as she can earn the adoration of a young fan. . . . You will find Swan Dive to be a wild ride dancing between risk and balance, legacy and possibility.”
—Andy Blankenbuehler

Georgina Pazcoguin, “The Rogue Ballerina,” has danced with the New York City Ballet since 2002 and was promoted to soloist in 2013. A steadily rising star, she is an ambassador of her art on many platforms, crossing over to Broadway, TV, and film. In addition to her many appearances at NYCB, including a celebrated portrayal of Anita in Jerome Robbins’s West Side Story Suite, her credits include the award-winning film N.Y. Export: Opus Jazz, Ivy in the Broadway revival of On the Town, and Victoria in the Broadway revival of Cats. Georgina is a passionate activist for the Orphaned Starfish Foundation, and she is cofounder of the globally recognized diversity initiative Final Bow for Yellowface. She lives in New York City, and a half hour with her will shake your stereotype of uptight ballerinas to bits.
Loading...
or support indie stores by buying on