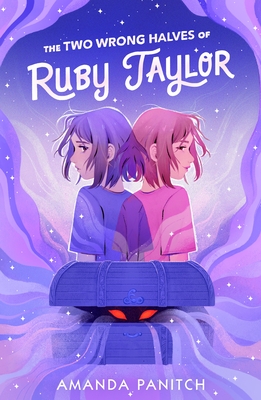 Funny and poignant, Amanda Panitch's new middle-grade novel The Two Wrong Halves of Ruby Taylor is an exploration of mixed families, identity, hundred-year-old curses, and the terrifying challenge of standing up for yourself against your loved ones.

Of her two granddaughters, Grandma Yvette clearly prefers Ruby Taylor's perfect—and perfectly Jewish—cousin, Sarah. They do everything together, including bake cookies and have secret sleep overs that Ruby isn't invited to. Twelve-year-old Ruby suspects Grandma Yvette doesn't think she's Jewish enough. The Jewish religion is matrilineal, which means it's passed down from mother to child, and unlike Sarah, Ruby’s mother isn’t Jewish.

But when Sarah starts acting out--trading in her skirts and cardigans for ripped jeans and stained t-shirts, getting in trouble at school--Ruby can’t help but be somewhat pleased. Then Sarah suddenly takes things too far, and Ruby is convinced Sarah is possessed by a dybbuk, an evil spirit... that Ruby may or may not have accidentally released from Grandma Yvette's basement. Ruby is determined to save her cousin, but a dybbuk can only be expelled by a "pious Jew." If Ruby isn't Jewish enough for her own grandmother, how can she possibly be Jewish enough to fight a dybbuk?

Amanda Panitch writes with a humorous, irresistible, and authentic voice. This character-driven story with a magic twist about speaking up and finding your place in the world is for fans of Erin Entrada Kelly, Stacey McAnulty, and Greg Howard.


Praise For The Two Wrong Halves of Ruby Taylor…

"This exciting story sensitively explores questions of identity and belonging in a Jewish context. A fun, thoughtful page-turner about exorcising the expectations of others to achieve self-acceptance." —Kirkus Reviews

“The dybbuk adds new interest to a familiar theme, and readers who privately seethe over their own “second best” status will feel Ruby’s pain and approve her reconciliation.” —The Bulletin of the Center for Children's Books (BCCB)

Amanda Panitch spent most of her childhood telling stories to her four younger siblings, trying both to make them laugh and scare them too much to sleep. Now she lives in New York City, where she writes dark, funny stories for teens, kids, and the pigeons that nest on her apartment balcony. Her books for kids include The Trouble with Good Ideas and The Two Wrong Halves of Ruby Taylor.
Loading...
or support indie stores by buying on