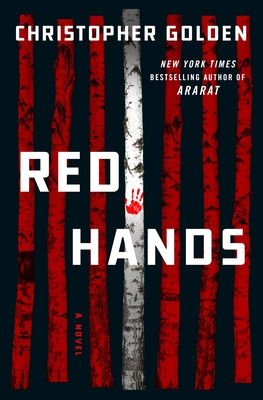 When a mysterious and devastating bioweapon causes its victims to develop Red Hands, the touch of death, weird science expert Ben Walker is called to investigate.

A car plows through the crowd at a July 4th parade. The driver climbs out, sick and stumbling, reaching out…and everyone he touches drops dead within seconds. Maeve Sinclair watches in horror as people she loves begin to die and she knows she must take action. But in the aftermath of this terror, it’s Maeve who possesses that killing touch. Fleeing into the mountains, struggling with her own grief and confusion, Maeve faces the dawning realization that she will never be able to touch another human being again.

"Weird s**t expert” Ben Walker is surprised to get a call from Alena Boudreau, director of the newly restructured Global Science Research Coalition. There’s an upheaval in the organization and she needs to send someone she can trust to Jericho Falls. Whoever finds Maeve Sinclair first will unravel the mystery of her death touch, and many are willing to kill her for that secret.

Walker’s assignment is to get her off the mountain alive. But as Maeve searches for a hiding place, hunted and growing sicker by the moment, she begins to hear an insidious voice in her head, and the yearning, the need… the hunger to touch another human being continues to grow. When Walker and Maeve meet at last, they will unravel a stunning legacy of death and betrayal, and a malignant secret as old as history.


Praise For Red Hands: A Novel…

"Tautly written, Red Hands — the third in a series starring Walker — excels not just because of its scare factor (which is high), but also its humane depiction of grief, isolation and fear, growing mistrust of government and even one’s own neighbors." —The Washington Post

"The neck-whipping action and shifting points of view give the reader a wide-angle perspective...invoking maximum terror on every page...For fans of horror-thriller series like those by Jonathan Maberry and Mira Grant." —Booklist (Starred Review)

"Red Hands is an absolutely riveting novel. I couldn't put it down. A thriller filled to the brim with equal parts terror and heart. Only Christopher Golden could weave together compelling characters and a gripping plot like this.” —Mallory O'Meara, bestselling author of The Lady from the Black Lagoon

"Ben Walker is back in Christopher Golden's Red Hands, a plague novel with a twist you won't see coming. This novel is part thriller, part horror, part science fiction -- in other words, as immediate and timely as this morning's paper. Except in Golden's world, the good guys give as good as they get. And the ride is a hell of a lot more fun." —Nathan Ballingrud, author of Wounds

“This barnstorming thriller-with-a-twist starts with a whammy and doesn't let up until the last page. Clear your schedule - you won't be able to put this down once you start it. Reads like a Stephen King novel on speed.”
—Sarah Lotz, author of The White Road and Day Four

"From page one, Red Hands grabs you by the throat and doesn’t let go. The pacing is perfect. The action is chaotic, vivid, and incredibly satisfying. Full of intrigue, governmental scheming, and biological terror, this is one dark thriller I’ll be talking about—and recommending—for years to come." —Rio Youers, author of Lola on Fire and The Forgotten Girl

"Ben Walker embarks on his most terrifying mission yet, when merely touching the ones closest to you will cause them to die. Filled with pain and fury, heartache and love, Red Hands is a scorchingly potent thriller." —Tim Lebbon, New York Times bestselling author of Eden

“Red Hands is a brilliant, devious, and deeply disturbing thriller that blurs the line between the fantastic and our very real world. Highly recommended.” —Jonathan Maberry, New York Times bestselling author of V-Wars and Rage

“Christopher Golden has done it again! Red Hands is a full-throttle thriller that will leave you breathless. The opening chapter gave me nightmares, and by the time I reached the final page, I was too frightened to turn the lights out.” —Richard Chizmar, New York Times bestselling author of Gwendy’s Magic Feather and The Girl on the Porch

CHRISTOPHER GOLDEN (he/him) is the New York Times bestselling and Bram Stoker award-winning author of Ararat, Snowblind, Dead Ringers, and Of Saints and Shadows, among many other novels. With Mike Mignola, he is the co-creator of two cult favorite comic book series, Baltimore and Joe Golem: Occult Detective. Golden is also the editor of such anthologies as Seize the Night, The New Dead, and Dark Cities, and the co-host of the popular podcast "Three Guys with Beards." He lives in Massachusetts.
Loading...
or
Not Currently Available for Direct Purchase