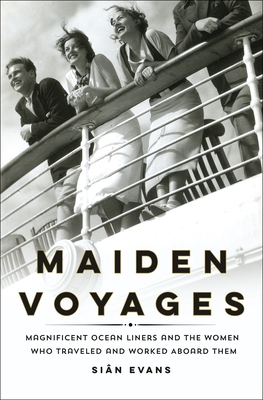 In an engaging and anecdotal social history, Siân Evans's Maiden Voyages explores how women’s lives were transformed by the Golden Age of ocean liner travel between Europe and North America.

During the early twentieth century, transatlantic travel was the province of the great ocean liners. It was an extraordinary undertaking made by many women, whose lives were changed forever by their journeys between the Old World and the New. Some traveled for leisure, some for work; others to reinvent themselves or find new opportunities. They were celebrities, migrants and millionaires, refugees, aristocrats and crew members whose stories have mostly remained untold—until now.

Maiden Voyages is a fascinating portrait of the era, the ships themselves, and these women as they crossed the Atlantic. The ocean liner was a microcosm of contemporary society, divided by class: from the luxury of the upper deck, playground for the rich and famous, to the cramped conditions of steerage or third class travel. In first class you’ll meet A-listers like Marlene Dietrich, Wallis Simpson, and Josephine Baker; the second class carried a new generation of professional and independent women, like pioneering interior designer Sibyl Colefax. Down in steerage, you’ll follow the journey of émigré Maria Riffelmacher as she escapes poverty in Europe. Bustling between decks is a crew of female workers, including Violet “The Unsinkable Stewardess” Jessop, who survived the Titanic disaster.

Entertaining and informative, Maiden Voyages captures the golden age of ocean liners through the stories of the women whose transatlantic journeys changed the shape of society on both sides of the globe.


Praise For Maiden Voyages: Magnificent Ocean Liners and the Women Who Traveled and Worked Aboard Them…

"[A] bracing history...Evans intersperses these eventful histories with splashes of color about [women] who used the sea as a magic carpet to self-invention." --The New York Times

"A fascinating account of ocean travel between Europe and America during the height of the 'Golden Age,' and between the First and Second World Wars. The glamour and the terror. Accounts of the rich and famous, to the very poorest aliens seeking refuge in a new land, and the ships employees (women) who catered and cared for them. This historical work reads like a page-turning novel. So well researched! A truly amazing work by Sian Evans!" --Marianne Schulke, bookseller at Castlemere Books

“[A] riveting slice of social history...Evans does a brilliant job of describing the unexpected textures of life at sea.”–The Mail on Sunday (UK)

“[A] wonderfully readable account [of] the women who crossed the Atlantic…from Lady Astor to the half-starved refugees of Europe, from cabaret artistes and adventuresses to unflappable stewardesses and reliable lifeboatwomen.” –The Times Literary Supplement (UK)

"Evans is deft with her interweaving of narrative and history." —Sunday Times (UK)

Siân Evans is the author of several books, including Queen Bees: Six Brilliant and Extraordinary Society Hostesses between the Wars. Her articles have appeared in many publications, including the Daily Mail, the Daily Express, BBC Antiques Roadshow Magazine, Coast Magazine, National Trust Members' Magazine, and The Lady. A freelance film consultant for the National Trust, she has an MA in Cultural History from the Royal College of Art, London.
Loading...
or support indie stores by buying on