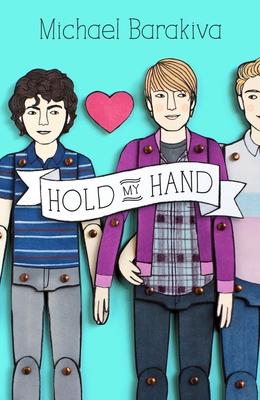 Michael Barakiva's Hold My Hand is a funny, smart, relatable take on the joy and challenges of teenage love, the boundaries of forgiveness, and what it really means to be honest.

Alek Khederian thinks about his life B.E. and A.E.: Before Ethan and After Ethan. Before Ethan, Alek was just an average Armenian-American kid with a mess of curly dark hair, grades not nearly good enough for his parents, and no idea of who he was or what he wanted. After he got together with Ethan, Alek was a new man. Stylish. Confident. (And even if he wasn’t quite marching in LGBTQ parades), Gay and Out and Proud.

With their six-month anniversary coming up, Alek and Ethan want to do something special to celebrate. Like, really special. Like, the most special thing two people in love can do with one another. But Alek’s not sure he’s ready for that. And then he learns something about Ethan that may not just change their relationship, but end it.

Alek can't bear the thought of finding out who he'd be P.E.: Post-Ethan. But he also can't forgive or forget what Ethan did. Luckily, his best friend Becky and madcap Armenian family are there to help him figure out whether it’s time to just let Ethan go, or reach out and hold his hand.


Praise For Hold My Hand…

"Love abounds, heartache happens, and friendship endures in this hilarious and timely coming-of-age novel. Barakiva (One Man Guy, 2014) creates an engaging central couple whom readers will root for and smartly surrounds them with a flawless cast of three-dimensional supporting characters who round out the protagonists while standing out in their own rights . . . The novel is enriched with vividly textured Armenian cultural details. An honest and compelling teen romance." —Kirkus Reviews

"Barakiva follows up One Man Guy with a highly satisfying sequel that continues to develop the authenticity and complexity of both Alek and Ethan. Alek’s story also delves realistically—and with some humor—into the stand he takes when his Orthodox pastor proves to be homophobic. This story shows the ways people can disappoint one another, break one another’s hearts, and get past such crises.VERDICT A delightful and important addition to collections serving teens, whether or not the first book is held." —School Library Journal

Michael Barakiva, author of One Man Guy and Hold My Hand, is a theater director and writer of Armenian/Israeli descent who lives in Manhattan with his husband, Rafael. He is a graduate of Vassar College and the Juilliard School, an avid cook and board-game player, and a soccer player with the New York Ramblers.
Loading...
or
Not Currently Available for Direct Purchase