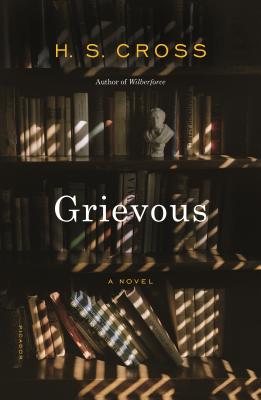 H. S. Cross returns to “a school as nuanced and secretive as J. K. Rowling’s Hogwarts” (The Rumpus) in Grievous, the sequel to her coming-of-age novel Wilberforce.

St. Stephen’s Academy, Yorkshire, 1931. A world unto itself, populated by boys reveling in life’s first big mistakes and men still learning how to live with the consequences of their own. They live a cloistered life, exotic to modern eyes, founded upon privilege, ruled by byzantine and often unspoken laws, haunted by injuries both casual and calculated. Yet within those austere corridors can be found windows of enchantment, unruly love, and a wild sort of freedom, all vanished, it seems, from our world.

Told from a variety of viewpoints—including that of unhappy Housemaster John Grieves—Grievous takes us deep inside the crucible of St. Stephen’s while retaining a clear-eyed, contemporary sensibility, drawing out the urges and even mercies hidden beneath the school’s strict, unsparing surface. The Academy may live by its own codes, but as with the world around it—a world the characters must ultimately face—it already contains everything necessary to shape its people or tear them apart.


Praise For Grievous: A Novel…

"[Grievous] is beautifully written, a tour de force of psychological insight into its richly realized characters, and an extraordinary exercise in mood, tone, and characterization. It is not to be missed." —Michael Cart, Booklist (starred review)

"Five years after the upheaval depicted in Wilberforce (2015), life at St. Stephen’s Academy has returned to its version of normalcy. That is to say, its public school boys talk a strange slang while enduring bullying, caning, and countless other rituals . . . Cross is a good writer who draws on a Kipling-esque nostalgia in her entertainingly peculiar picture of the public school as crucible for young male Brits." —Kirkus Reviews (starred review)

“Grievous is a complex portrait of a sensitive housemaster in a 1931 English boarding school and his nemesis, an angry boy who hides his true self in a box of mysterious letters . . . Perceptively and richly written, this novel tells of a lost monastic world where the need to be loved may never be spoken and yet is in every heartbeat.” —Stephanie Cowell, author of Claude and Camille and The Physician of London

"Similar work was done by Flannery O’Connor, say, or Walker Percy, although I would place Cross closer to the Scottish novelist Muriel Spark: the extraordinary ordinary . . . You will find Grievous is strangely hopeful. Indeed, it is a work of love for our demented world." —Victor Lee Austin, The Living Church

"[An] intense . . . and moving narrative about lives of quiet and not-so-quiet desperation . . . Cross's fine eye for detail and empathy for the human condition . . . [are] rewarding in their emotional insights." —Kristen McDermott, Historical Novel Society

H. S. Cross was born in Grosse Pointe, Michigan, and studied at Harvard University. Wilberforce is her debut novel. She has taught at Friends Seminary and lives in New York. Cross is at work on a new novel set at St. Stephen's Academy.
Loading...
or
Not Currently Available for Direct Purchase