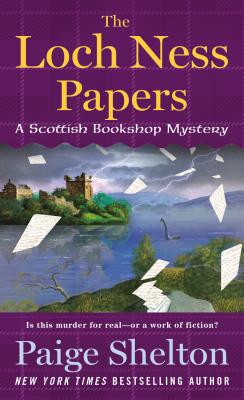 Set in Edinburgh, Scotland, The Loch Ness Papers is the fourth in the Scottish Bookshop Mystery series by Paige Shelton.

What do The Cracked Spine and the Loch Ness monster have in common?

Delaney Nichols loves working at the Cracked Spine among stacks of hard-to-find volumes and literary artifacts. With her great job and engagement to devastatingly handsome pub-owner Tom Shannon, Delaney’s expat life in Scotland is straight out of a fairy tale. But the plot thickens when Delaney befriends Norval Fraser, a charming old man who is oddly obsessed with the Loch Ness monster. When Norval’s nephew is found dead and the police name him as a prime suspect, it becomes Delaney’s job to learn what really happened. . . and find the truth about what’s lurking beneath the surface.

“The perfect book to curl up with on a rainy day.” —BookPage

Is “Nessie” involved in this murder somehow? Delaney has her work cut out for her in getting to the deep, dark bottom of this mystery. Now, with a wedding to plan, her Kansas family in town, and the arrival of a wildly valuable book from Texas, Delaney enters a desperate race to clear her new friend’s name—even if that means digging up a dangerous secret as old as time itself. . .

“Delightful…one of the most enjoyable installments in the series.” —Library Journal (starred review)

PAIGE SHELTON had a nomadic childhood, as her father's job as a football coach took her family to seven different towns before she was even twelve years old. After college at Drake University in Des Moines, Iowa, she moved to Salt Lake City. She thought she'd only stay a couple years, but instead she fell in love with the mountains and a great guy who became her husband. After many decades in Utah, she and her family now live in Arizona. She writes the Scottish Bookshop Mystery series, which begins with The Cracked Spine.
Loading...
or support indie stores by buying on