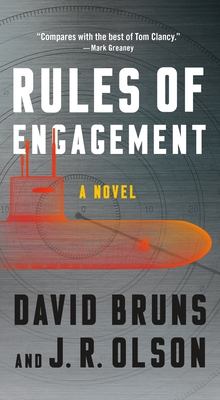 In David Bruns and J. R. Olson's military thriller Rules of Engagement, a terrorist breach of the computer systems of the three most powerful navies sets them on a collision course for World War III.

Three military superpowers. One cyber weapon. And no time left to lose. . .

One of the world’s most wanted terrorists has resurfaced in North Korea. His enemy: The West. His mission: to unleash a series of cyber sneak attacks against the Chinese and on the U.S. Pacific forces—and do no less than destroy everything and everyone in his path.

Don Riley, head of U.S. Cyber Command, has just discovered that the Chinese have lost control of their military—and the same computer virus has infected the American network. Now it’s up to Riley to track down the elusive terrorist and put a stop to his sinister plan. His secret weapon: a trio of supremely skilled midshipmen from the U.S. Naval Academy who can uncover the infiltration. But the cyber weapons are always one step ahead and, before long, a real-world conflict with human casualties begins to mount. . . and time is almost up for Riley and his team to launch a counterattack before World War III inevitably begins.

“With their background in the U.S. Navy, both Bruns and Olson have the right stuff to create a realistic military tale.” —Booklist


With J. R. Olson, Bruns is the author of the WMD (Weapons of Mass Deception) Files series.


With David Bruns, Olson is the author of the WMD (Weapons of Mass Deception) Files series.