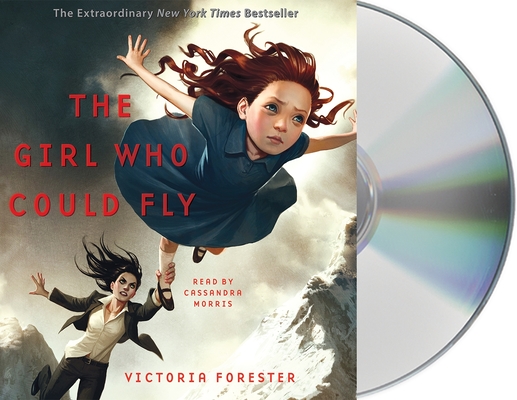 The Girl Who Could Fly (Piper McCloud #1)

"It's the oddest/sweetest mix of Little House on the Prairie and X-Men. I was smiling the whole time (except for the part where I cried). I gave it to my mom, and I'm reading it to my kids—it's absolutely multigenerational. Prepare to have your heart warmed." — Stephenie Meyer, author of the Twilight saga

You just can't keep a good girl down...unless you use the proper methods.

Piper McCloud can fly. Just like that. Easy as pie.

Sure, she hasn't mastered reverse propulsion and her turns are kind of sloppy, but she's real good at loop-the-loops.

Problem is, the good folk of Lowland County are afraid of Piper. And her ma's at her wit's end. So it seems only fitting that she leave her parents' farm to attend a top-secret, maximum-security school for kids with exceptional abilities.

School is great at first with a bunch of new friends whose skills range from super-strength to super-genius. (Plus all the homemade apple pie she can eat!) But Piper is special, even among the special. And there are consequences.

Consequences too dire to talk about. Too crazy to consider. And too dangerous to ignore.

At turns exhilarating and terrifying, The Girl Who Could Fly is an unforgettable story of defiance and courage about an irrepressible heroine who can, who will, who must...fly.


Praise For The Girl Who Could Fly (Piper McCloud #1)…

“It's the oddest/sweetest mix of Little House on the Prairie and X-Men. I was smiling the whole time (except for the part where I cried). I gave it to my mom, and I'm reading it to my kids--it's absolutely multigenerational. Prepare to have your heart warmed.” —Stephenie Meyer, The Twilight Saga

“In this terrific debut novel, readers meet Piper McCloud, the late-in-life daughter of farmers...The story soars, just like Piper, with enough loop-de-loops to keep kids uncertain about what will come next....Best of all are the book's strong, lightly wrapped messages about friendship and authenticity and the difference between doing well and doing good.” —Booklist, starred review

“Forester's disparate settings (down-home farm and futuristic ice-bunker institute) are unified by the rock-solid point of view and unpretentious diction… any child who has felt different will take strength from Piper's fight to be herself against the tide of family, church, and society.” —The Horn Book Review

“When her talent for flying is discovered, a charismatic director of a special school takes Piper under her wing. She arrives at an amazing place with multiple floors and discovers a lot of other kids with extraordinary powers, too--as well as a nefarious plot to remove their special talents by altering their DNA .” —Jennifer Ralston, Harford County Public Library, for School Library Journal

“Piper McCloud comes from a household that does what they do because doing otherwise would break tradition--they don't handle change well. When her conservative parents realize that Piper has the ability to fly, they forbid her to do it since it's just not their way of living. It's not quite so easy for Piper to give up flying, however….This novel is an unforgettable story that will challenge many adolescents in their quest to decide between right and wrong, good and evil.” —Ashleigh Larsen, KLIATT

“Plucky Piper faces nearly insurmountable odds and must keep her innate sense of right and wrong focused through her trials. This fantasy has an air of reality, maintained by the aw-shucks flavor of the dialogue and its determined, good-as-gold heroine. Hints of a sequel appear after the tidy ending of this X-Men-like superhero take on the world.” —Kirkus

Victoria Forester is the author of The Girl Who Could Fly, a Booklist Editor’s Choice and Bank Street Best Children’s Book of the Year. She is also a successful screenwriter, and originally wrote The Girl Who Could Fly for film. She liked the story so much that she decided to expand it into her first book. Victoria grew up on a remote farm in Ontario, Canada, and graduated from the University of Toronto. She now lives in Los Angeles with her husband, daughter, and cat.

Cassandra Morris is a voice actress known as the voice of Lola on the cartoon series Angelo Rules and has provided voices for many other popular animated shows, including Pokemon, K-On, and Yu-Gi-Oh. Her credits include numerous books for young readers, such as Ivy and Bean and Tempted from P. C. Cast’s House of Night series. She was nominated for a 2010 Audie Award for audiobook narration. She has done sketch comedy for David Letterman and HBO, and studies Improv at Upright Citizens Brigade Theatre. Her audiobook credits include Gossip Girl, The Magic School Bus, Pretty Little Liars, and The Lying Game .
Loading...
or
Not Currently Available for Direct Purchase