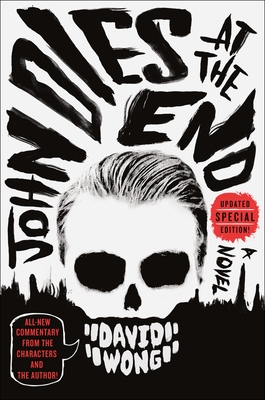 John Dies at the End

"[Jason Pargin] has updated the Lovecraft tradition and infused it with humor that rather than lessening the horror, increases it dramatically. Every time I set the book down down, I was wary that something really was afoot, that there were creatures I couldn't see, and that because I suspected this, I was next. Engaging, comic, and terrifying." —Joe Garden, Features Editor, The Onion

"[Pargin] is like a mash-up of Douglass Adams and Stephen King... 'page-turner' is an understatement."
—Don Coscarelli, director, Phantasm I-V, Bubba Ho-tep

"JOHN DIES AT THE END has a cult following for a reason: it's horrific, thought-provoking, and hilarious all at once. This is one of the most entertaining and addictive novels I've ever read." —Jacob Kier, Publisher, Permuted Press

STOP. You should not have touched this flyer with your bare hands. NO, don't put it down. It's too late. They're watching you. My name is David. My best friend is John. Those names are fake. You might want to change yours. You may not want to know about the things you'll read on these pages, about the sauce, about Korrok, about the invasion, and the future. But it's too late. You touched the book. You're in the game. You're under the eye. The only defense is knowledge. You need to read this book, to the end. Even the part with the bratwurst. Why? You just have to trust me.

The important thing is this: The sauce is a drug, and it gives users a window into another dimension. John and I never had the chance to say no. You still do. I'm sorry to have involved you in this, I really am. But as you read about these terrible events and the very dark epoch the world is about to enter as a result, it is crucial you keep one thing in mind: None of this was my fault.


Praise For John Dies at the End: Updated Special Edition…

“John Dies at the End…[is] a case of the author trying to depict actual, soul-sucking lunacy, and succeeding with flying colors.” —Fangoria

“[Jason Pargin] is like a mash-up of Douglas Adams and Stephen King . . . ‘page-turner' is an understatement.” —Don Coscarelli, director, Phantasm I–V and Bubba Ho-tep

“The rare genre novel that manages to keep its sense of humor strong without ever diminishing the scares.” —The Onion AV Club

“When it's funny, it's laugh-out-loud funny, yet when the situation calls for chills, it provides them in spades.” —Kirkus Reviews

JASON PARGIN is the New York Times bestselling author of the John Dies at the End series as well as the award-winning first book in the Zoey Ashe series, Futuristic Violence and Fancy Suits, formerly published under the pseudonym David Wong. His essays at Cracked.com have been read by tens of millions of people around the world.
Loading...
or
Not Currently Available for Direct Purchase