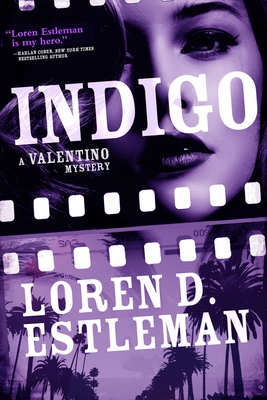 Film detective Valentino is summoned to the estate of Ignacio Bozel to collect a prized donation to the university’s movie library: Bleak Street, a film from the classic noir period, thought lost for more than sixty years.

Bleak Street was never released. Its star, Van Oliver, a gifted and charismatic actor with alleged ties to the mob, disappeared while the project was in post-production, presumably murdered by gangland rivals: another one of Hollywood’s unsolved mysteries. Studio bosses elected to shelve the film rather than risk box-office failure. UCLA’s PR Department is excited about the acquisition, but only if Valentino can find a way to sell it in the mainstream media by way of a sensational discovery to coincide with its release: “We want to know what happened to Oliver.”

A simple quest for a few hundred yards of celluloid opens a portal into a place darker than night.

“Film noir has provided the frame story for a wealth of crime fiction, and now Estleman adds another sterling entry to the growing list ... Classic-movie fans who don't know this series should be ashamed of themselves.” —Booklist, starred review

“Fans of Estleman will enjoy the wealth of film detail that fills out the story. Classic noir tropes are deployed with levels of glitz and power that Spade and Marlowe never imagined.” —Library Journal

Loren D. Estleman is the author of more than eighty novels, including the Amos Walker, Page Murdock, and Peter Macklin series. Winner of three Shamus Awards, three Western Heritage Awards, four Spur Awards and many other literary prizes. He lives outside Detroit with his wife, author Deborah Morgan.
Loading...
or
Not Currently Available for Direct Purchase