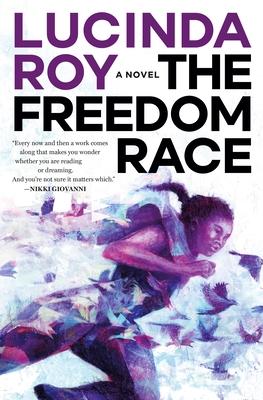 The Freedom Race (The Dreambird Chronicles #1)


Praise For The Freedom Race (The Dreambird Chronicles #1)…

“Gut-wrenching read.... This powerful, riveting novel provides a glimpse into a nightmarish future that’s all too similar to our past.”—Buzzfeed

“Roy’s comprehensive worldbuilding and immersive language creates a tapestry.... Ji-ji’s journey is a story of resilience and hope rooted in a place where Octavia Butler and Rivers Solomon intersect with The Handmaid’s Tale.”—Booklist

Novelist, poet, and memoirist Lucinda Roy is the author of the speculative novel The Freedom Race and three collections of poetry, including Fabric: Poems. Her early novels are Lady Moses, a Barnes and Noble Discover Great New Writers Selection, and The Hotel Alleluia. She also authored the memoir No Right to Remain Silent: What We’ve Learned from the Tragedy at Virginia Tech. Among her awards are the Eighth Mountain Prize for Poetry, and the Baxter Hathaway Prize for her long slave narrative poem “Needlework,” and a state-wide faculty recognition award. She was awarded an Honorary Doctorate by the University of Richmond. An Alumni Distinguished Professor at Virginia Tech, she teaches fiction, poetry, and creative nonfiction in the graduate and undergraduate Creative Writing Program. Professor Roy has been a guest on numerous TV and radio shows, including The CBS Evening News, The Today Show, Good Morning America, CBS’s Sunday Morning, Oprah, and NPR. Her work has appeared in the Chronicle of Higher Education, North American Review, the New York Times, the Guardian, USA Today, American Poetry Review, and many other publications. She delivers keynotes and presentations around the country on creative writing, diversity, campus safety, and higher education.

1. As the main character in The Freedom Race through whose eyes most of the action is seen, Ji-ji writhes under the weight of a system that enslaves her. Where does she find the courage to act? How much would you be willing to risk to escape the planting? Which aspects of planting life seem to you to be the most insidious?

2. The book opens with an invented proverb: “Dreams are promises the imagination makes to itself.” How do characters “dreaminate” their future? Is it possible, to “overdream” as Silapu and Bettieann suggest, or is Uncle Dreg right to encourage his followers to dream larger than life?

3. In the novel, the U.S. became the Disunited States after the second Civil War called the Sequel, secessionism, climate change, and pandemics fractured the nation. Do you think that the world depicted in the novel is a flight of fancy or a prediction of what could happen in the future? How does it draw upon the current racial dynamic in the U.S. and elsewhere?

4. This survival story focuses primarily on the lives of girls and women of color. Though their bodies are claimed by the steaders, the women manage to build supportive communities. How do the females in the novel sustain and empower each other?

5. How is the quest for social justice and racial equality portrayed in The Freedom Race, and what is the relationship of this broader quest to the quest for the self?

6. In The Freedom Race, the real world nudges up against the imagined, and science and magical realism are different sides of the same story. What were some of the most “real” moments for you in the book, and which parts seemed closer to dreaming? How do characters in the novel construct their own reality?

7. Walls and fences are two of the dominant features in the novel. How are they used in the book not only to define spaces but also to maintain the status quo?

8. The saying “The only way for a seed to be Free / Is to swing on high from a penal tree” is true for many of those confined to plantings. Yet somehow, the enslaved keep Freedom alive as an uplifting idea. What does Freedom—always capitalized for people like Ji-ji—come to mean to her and to other so-called seeds in the Territories?

9. Purple appears as a refrain in the book. Why do you think this color has such a strong hold on a future enslaved population’s collective imagination? What are some of purple’s literary and religious antecedents?

10. The Freedom Race is a hybrid novel that does not fit neatly into a single category. It can be read as an Afro-futuristic adventure narrative, a spiritual allegory, a satirical critique of racism, a reconfiguration of mythic archetypes, or a meditation on flight, to name some possible interpretations. How did you read it? How did these characters’ experiences connect with your own?