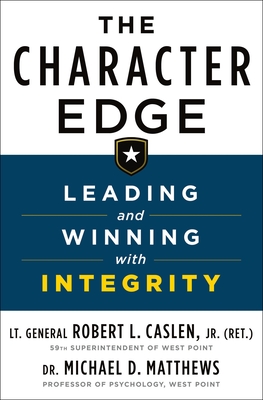 Leading and Winning with Integrity

The former superintendent at West Point and a psychologist explain why all successful leaders rely on a foundation of strong character.

Among the most successful leaders throughout history—from Abe Lincoln to Rosa Parks, Mahatma Gandhi to Susan B. Anthony, Martin Luther King, Jr. to Nelson Mandela—some were brilliant mathematicians and economists, others were creative visionaries, still others were masterful at strategic planning. Their mastery of their field wasn’t the secret to their highly effective leadership. All of their skill, grit, resilience, charisma, and courage emanated from one thing: their strength of character.

Character—the moral values and habits of an individual—is in the spotlight now more than perhaps at any other point in modern history. Politicians distort facts. Corporations cheat customers and investors. Athletes are caught using illegal supplements. In addition to harming our culture at large, these failures of character have a profound and undermining impact on leadership.

The authors of this book are experts on the value of character, its correlation with successful leadership, and how to build it in individuals and prospective leaders. General Robert L. Caslen, Jr. served the US Army for over 43 years and served as Superintendent at the US Military Academy at West Point. Psychologist Dr. Michael D. Matthews is a Professor of Engineering Psychology at West Point who has focused on the psychology of character for years. Together they witnessed firsthand that raw talent is not enough to stand on its own; successful leadership relies on the critical foundation of a strong character.

In The Character Edge they leverage their perspectives to offer an empowering, story-driven argument—backed by the latest scientific research—that character is vital to success. They give readers the tools to build and sustain character in themselves and their organizations by testing readers' strengths of the gut, head and heart and teaching how to build trust and nurture the seeds of character.


Praise For The Character Edge: Leading and Winning with Integrity…

"The Character Edge is a unique and valuable book because it combines the battle-tested leadership lessons of General Caslen with the perspective of Professor Matthews, a senior behavioral scientist. It is both substantive and wonderfully readable, packed with stories—many of them quite moving—backed up with serious research." —Forbes

"Readers of The Character Edge will be able to take actionable steps to improve their own character and well-being." —ARMY Magazine

"What determines the importance and long-lasting impact of leadership? Lieutenant general and former West Point superintendent Caslen and psychologist Matthews examine the qualities of character that make a leader worth following...[their] combined experience culminates in a fascinating study of leadership." —Booklist

“The Character Edge is inspiring and practical in equal measure, drawing upon both scientific research and personal experience in how, and why, to develop strengths of heart, mind, and gut. Only Mike Matthews and Bob Caslen could have written it. This will surely be an instant classic!” —Angela Duckworth, CEO of the Character Lab and bestselling author of Grit

“If you ever aspire to effective leadership, whether at the tactical or strategic level, you'll soon learn that the most important ingredient in effective leadership is character. Bob Caslen and Mike Matthews have captured this truth in both theory and application with moving and insightful stories and personal experiences. This book will both challenge you and motivate you to lead a life of integrity and honor, and in so doing, inspire the men and women you lead to the highest achievements they never thought possible. Bob and Mike have something very, very important here. I hope it goes viral in a big way.” —Admiral William H. McRaven, US Navy (Retired), former Chancellor of the University of Texas and bestselling author of Sea Stories: My Life in Special Operations

“General Bob Caslen and Dr. Mike Matthews have done a great job illustrating why character and excellence are the most important elements in effective leadership. I have always believed that character and excellence go hand in hand, and this has always been the formula for our teams that win. Bob and Mike are proven leaders of character, and their examples and principles are what I have used my entire career.” —Mike Krzyzewski, head men's basketball coach at Duke University

“General Caslen and Michael Matthews are absolutely the right people to write this book. Together, they form a Genius of AND — the art of leadership AND the science of character, the crucible of hard experience AND the rigor of academic research, the searing lessons of decisive action AND the enduring insights of wise reflection. Few great leaders have charismatic personality, but all have character that inspires. Caslen and Matthews show how and why this fundamental inner architecture of leadership can — and must — be built.” —Jim Collins, author Good to Great, co-author Built to Last

“The Character Edge artfully combines scholarly research and practical experience in an interesting, persuasive way. I think character matters more today than at any time in my memory. Bob Caslen and Michael Matthews get it right.” —General Martin E. Dempsey, US Army (Retired), 18th Chairman of the Joint Chiefs of Staff, author of Radical Inclusion: What the Post-9/11 World Should Have Taught Us About Leadership

“The world needs leaders with strong character more than ever, and The Character Edge will show you how that is done in two institutions that carry the trust and respect of all Americans — the United States Military Academy at West Point, and the United States Army. This book is a must read for anyone who aspires to live a life of character.” —General (Retired) Raymond T. Odierno, 38th Chief of Staff of the United States Army

“We believe it is the quality and character of the leader that determines the results. In The Character Edge we discover a blueprint for instilling values-based leadership to achieve significance and success.” —Frances Hesselbein, Chairman, The Frances Hesselbein Leadership Forum; Former CEO, Girl Scouts of the USA; Presidential Medal of Freedom recipient

“As school administrators, be it at the state, local and campus levels, we have much in common with the sacred responsibility of military leaders, especially in light of what LTG (Ret.) Caslen terms the “Bank of Public Trust.” Caslen and Matthews give compelling illustrations of how trust accounts must be cherished and nurtured overtime and modeled consistently with “deposits of competence, character and caring.” As educators and public servants there is much we can draw from the stories, the exquisite scholarship and the “right way” lessons found throughout The Character Edge.” —Mary M. Keller, Ed.D., Former President & CEO, The Military Child Education Coalition

“In The Character Edge, Caslen and Matthews offer the definitive guide to how individuals and organizations may build and utilize positive character to flourish and win. Corporations who ‘get’ this message excel, those that do not will fail in the long run.” —Indra Nooyi, Former Chairman & CEO, PepsiCo

“Blending behavioral science with lessons learned in the crucible of military service, Bob Caslen and Mike Matthews have written a leadership book that is both timely and timeless. They examine the complex nature of character in both individuals and organizations with vivid examples from the military, sports, education and business. In a time of polarization and incivility, the authors have created a how-to manual for counteracting these destructive forces in ourselves and our institutions.” —Stefanie Sanford, Chief of Global Policy & External Relations, The College Board

Lieutenant General Robert L. Caslen, Jr. is the 29th president of the University of South Carolina. Caslen is a retired Army lieutenant general and former superintendent of the United States Military Academy at West Point. After retiring from the Army in 2018, Caslen became the senior counsel to the president at the University of Central Florida. Caslen grew up in Vermont, worked in his family’s ski lodge, and then was recruited to play football at West Point. Along with his bachelor’s degree from West Point, Caslen holds an MBA in finance from Long Island University and a master’s in industrial engineering from Kansas State University. He and his wife, Shelly, have been married for over 40 years and have three sons and four grandchildren.

Michael D. Matthews is Professor of Engineering Psychology at the United States Military Academy at West Point. He served as President of the American Psychological Association’s Society for Military Psychology from 2007 to 2008 and is a Templeton Foundation Senior Positive Psychology Fellow. From 2014 to 2015, he served as a Fellow for the U.S. Army Chief of Staff’s Strategic Studies Group. He has authored more than 250 scientific papers and edited several books on military psychology, and is the author of Head Strong: How Psychology is Revolutionizing War (Oxford University Press, 2014, revised edition, 2020). His book (coedited with David M. Schnyer), Human Performance Optimization: The Science and Ethics of Enhancing Human Capabilities (Oxford University Press) was published in 2019.
Loading...
or support indie stores by buying on