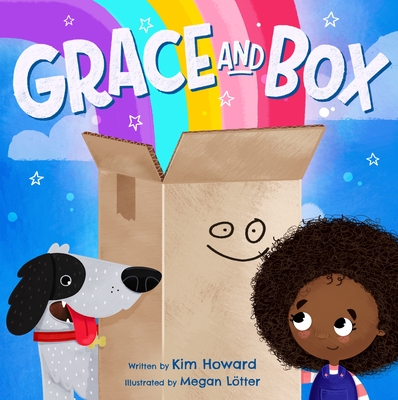 A little girl and a refrigerator box go on many adventures as they imagine all the things they can be in this debut picture book from Kim Howard and Megan Lotter, Grace and Box…

Grace and Box have become fast friends. Box delivered a refrigerator earlier in the week and by the end of it, Grace and Box had already been to space, gone camping, and explored the depths of the sea together.

But on Sunday, Grace notices something’s wrong with her buddy. Box has some rips and crumples that Band-Aids, ice packs, and rest on the couch can’t seem to heal. Grace certainly doesn't want these adventures to end, so she is determined to fix Box so that they can continue their play together!

A universal friendship (child and box) has come alive in this imaginative and humorous picture book. The depths of friendships run deep with children, even if they're just boxes to us!


Praise For Grace and Box…

"This readaloud is bound to be a lot of fun at storytime, as Box’s sloppily drawn smile and decrepit appearance worsen with each new adventure to much hilarity. Young viewers may seek a big box for their own imaginary travels, though it may not last as long as Grace’s."—The Bulletin for the Center of Children's Books (BCCB)

Kim Howard has been writing books since before she could spell. Her favorite childhood memories involve imagination and creativity, and like Grace, she grew up making homes and tunnels out of boxes. She loves stories, coffee, and spending time with her family. A former teacher, Kim lives in Bloomington, Indiana with her husband and children. Grace and Box is her debut picture book.

Megan Lötter is a picture book maker living in beautiful Cape Town, South Africa. She has illustrated Kirsty Paxton's The Chalk Giraffe and Kim Howard's Grace and Box. Megan graduated from Cape Peninsula University of Technology in 2008 with a Degree in Design. Her love for drawing and visual storytelling started at a very young age. This naturally drew her towards the fascinating world of illustration. South Africa's cultural diversity, twelve different languages, beautiful animals, patterns, and colors are underlying themes found throughout Megan's illustrations and characters.
Loading...
or support indie stores by buying on