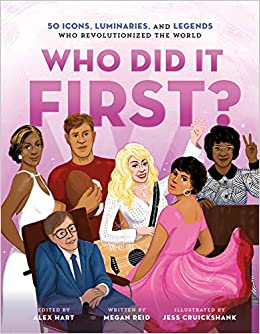 Who Did It First? 50 Icons, Luminaries, and Legends Who Revolutionized the World

A vibrantly illustrated and compelling collection of profiles about women and men—and one dog!—who made indelible marks in entertainment, science, politics, and sports.

You may know that Beyoncé was the first Black woman to headline Coachella. And maybe you know that Pelé was the first soccer player to score 1,000 professional goals. You might not know that RuPaul Charles was the first drag queen to get a star on the Hollywood Walk of Fame. Or that Selena Quintanilla-Pérez was the first Latinx artist to have an album hit the top of the Billboard 200.

Written by Megan Reid and illustrated by Jess Cruickshank, Who Did It First? 50 Icons, Luminaries, and Legends Who Revolutionized the World celebrates fifty trailblazers who made the world a better place. Filled with profiles highlighting what each subject accomplished first alongside vibrant illustrations, this book is a celebration of the iconic figures who have paved the way for future generations.

Megan Reid works in books and television. She’s lived in seven states and two countries (and gone to twelve schools!), but now she’s happy to be based in Brooklyn with her dog, Luna. Who Did It First? 50 Icons Who Revolutionized the World is her first middle grade book.

Alex Hart is the pseudonym for a children’s book editor and author who is the first person in his family to write and publish a book (Who Did It First? 50 Scientists, Artists, and Mathematicians Who Revolutionized the World). He lives with his husband in Brooklyn, New York and Hillsdale, New York.

Jess Cruickshank is an illustrator and letterer who once worked in advertising. Her work has appeared in various publications and books. She lives in Kitchener, Ontario.
Loading...
or support indie stores by buying on