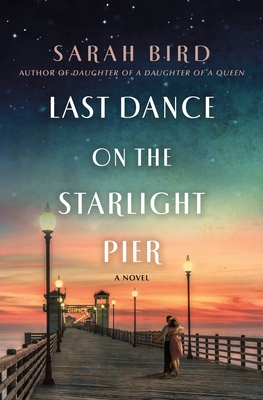 Last Dance on the Starlight Pier

Set during the Great Depression, Sarah Bird's Last Dance on the Starlight Pier is a novel about one woman—and a nation—struggling to be reborn from the ashes.

July 3. 1932. Shivering and in shock, Evie Grace Devlin watches the Starlite Palace burn into the sea and wonders how she became a person who would cause a man to kill himself. She’d come to Galveston to escape a dark past in vaudeville and become a good person, a nurse. When that dream is cruelly thwarted, Evie is swept into the alien world of dance marathons. All that she has been denied—a family, a purpose, even love—waits for her there in the place she dreads most: the spotlight.

Last Dance on the Starlight Pier is a sweeping novel that brings to spectacular life the enthralling worlds of both dance marathons and the family-run empire of vice that was Galveston in the Thirties. Unforgettable characters tell a story that is still deeply resonant today as America learns what Evie learns, that there truly isn’t anything this country can’t do when we do it together. That indomitable spirit powers a story that is a testament to the deep well of resilience in us all that allows us to not only survive the hardest of hard times, but to find joy, friends, and even family, in them.


Praise For Last Dance on the Starlight Pier: A Novel…

"Bird is a master at crafting narrative voices." - Booklist

"Sarah Bird ruthlessly strips away the shallow glamour of marathon dancing, exposing cynical, cash-driven machinations founded on desperate poverty and run by chiselers. [...] Yet, in the people who inhabit the dance floor, Bird creates a cast of fully realized, compassionate human beings." - The Dallas Morning News

"Blending the enthralling world of dance marathons during the Great Depression, with characters based on famous and Galvestonian from the 1930s, Last Dance on the Starlight Pier by award-winning author Sarah Bird might just become one of the most popular beach-reads of 2022." - Galveston Monthly Magazine

"Inspiring and hopeful, the latest from 2014 Texas Writer Award recipient and Texas Literary Hall of Fame inductee Sarah Bird is a must-read." - Tribeza

"Last Dance on the Starlite Pier brings to raucous life the dance marathons of the Great Depression, a lowdown world of strivers, grifters, innocents, and gangsters all trying to survive the hardest of hardscrabble times. These pages brim with primal energy, the story propelled by life-or-death stakes and the most vivid cast of characters you could ever hope to meet. Sarah Bird has given us a barnburner--or should I say pier burner?--of a novel that satisfies on every level." --Ben Fountain, author of Billy Lynn's Long Halftime Walk and National Book Critics' Circle Award Winner

"I was swept away by this nuanced portrait....Last Dance on the Starlight Pier is a reminder of our resilience." --Janet Skeslien Charles, New York Times bestseller of The Paris Library

"Last Dance on the Starlight Pier is like a rediscovered movie from the 1930s, starring a colorful cast of indelible characters from the indomitable heroine Evie Grace Drake to the low-rent showbiz types grabbing for the brass ring and the menacing wise guys who controlled the real-life Boardwalk Empire of Galveston, Texas in 1932. It’s a poignant, beautifully written story of troubled times and troubled hearts.” --Alan Brennert, bestselling author of Daughter of Moloka’i and Moloka’i

"An engaging and moving story of second chances and told with care and compassion. So relevant to our times and yet wholly and skillfully transportive to the world of yesteryear. Well done!" --Susan Meissner, author of The Nature of Fragile Things

"I loved this gorgeous and deeply compassionate novel! Take a front row seat to the astonishing world of Depression-era dance marathons---where the poor and the struggling could distract themselves from their troubles, and where former vaudevillians could keep being paid. Sarah Bird brings the 1930s to vivid, technicolor life, and Bird's characters--especially aspiring nurse Evie Grace--will dance away with your heart." -Stacy Swann, author Olympus,Texas (Good Morning America Pick)

"Last Dance on the Starlight Pier tells a deeply touching story in which down and out Evie sees truth triumphs, right is restored, and evil vanquished—a story that also is, in part, about the tragic consequences of failed leadership. A story resonant with our own time. Sarah Bird well represents what marathons were as performance, the type of people who promoted and danced in them and the atmosphere of an era that continues to play out in the 21st century." --Carol Martin, author of Dance Marathons: Performing American culture of the 1920s and 1930s and Theatre of the Real.

Sarah Bird’s novel, Above the East China Sea, was long-listed for the Dublin International Literary Award. A Dobie-Paisano Fellowship helped in researching Daughter of a Daughter of a Queen. Raised in an Air Force family on bases around the world, Sarah is the child of two warriors, a WWII Army nurse and an Air Corps bombardier, who met at a barn dance in North Africa. She lives in Austin, Texas.
Loading...
or support indie stores by buying on