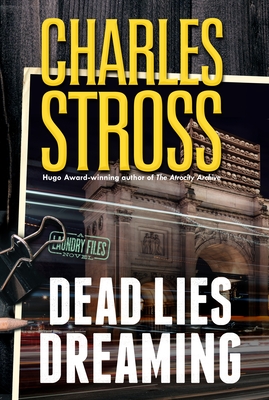 When magic and superpowers emerge in the masses, Wendy Deere is contracted by the government to bag and snag supervillains in Hugo Award-winning author Charles Stross' Dead Lies Dreaming: A Laundry Files Novel.

As Wendy hunts down Imp—the cyberpunk head of a band calling themselves “The Lost Boys”— she is dragged into the schemes of louche billionaire Rupert de Montfort Bigge. Rupert has discovered that the sole surviving copy of the long-lost concordance to the one true Necronomicon is up for underground auction in London. He hires Imp’s sister, Eve, to procure it by any means necessary, and in the process, he encounters Wendy Deere.

In a tale of corruption, assassination, thievery, and magic, Wendy Deere must navigate rotting mansions that lead to distant pasts, evil tycoons, corrupt government officials, lethal curses, and her own moral qualms in order to make it out of this chase alive.

CHARLES STROSS (he/him) is a full-time science fiction writer and resident of Edinburgh, Scotland. He has won three Hugo Awards for Best Novella, including for the Laundry Files tale “Equoid.” His work has been translated into over twelve languages. His novels include the bestselling Merchant Princes series, the Laundry series (including Locus Award finalist The Dilirium Brief), and several stand-alones including Glasshouse, Accelerando, and Saturn's Children.