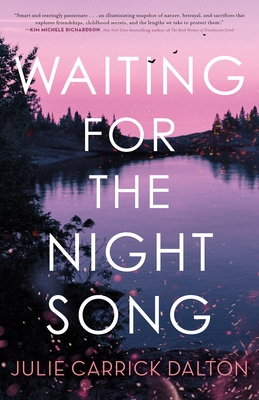 Waiting for the Night Song

A startling and timely debut, Julie Carrick Dalton's Waiting for the Night Song is a moving, brilliant novel about friendships forged in childhood magic and ruptured by the high price of secrets that leave you forever changed.

Cadie Kessler has spent decades trying to cover up one truth. One moment. But deep down, didn’t she always know her secret would surface?

An urgent message from her long-estranged best friend Daniela Garcia brings Cadie, now a forestry researcher, back to her childhood home. There, Cadie and Daniela are forced to face a dark secret that ended both their idyllic childhood bond and the magical summer that takes up more space in Cadie’s memory then all her other years combined.

Now grown up, bound by long-held oaths, and faced with truths she does not wish to see, Cadie must decide what she is willing to sacrifice to protect the people and the forest she loves, as drought, foreclosures, and wildfire spark tensions between displaced migrant farm workers and locals.

Waiting for the Night Song is a love song to the natural beauty around us, a call to fight for what we believe in, and a reminder that the truth will always rise.


Praise For Waiting for the Night Song…

“Waiting for the Night Song is not just a coming of age story, but several coming of age stories. It’s a novel about how time passes and how time stands still, ties that bind and ties that constrict, place and our place in the world, what keeps us together and what keeps us apart, all of which is to say that Julie Carrick Dalton has written a novel of elegant contradiction, intimately explored, beautifully woven together.” —Laurie Frankel, New York Times bestselling author of One Two Three

“Both a timely and timeless literary mystery, Waiting for the Night Song is as seductive as it is smart, blending the allure of Julie Dalton’s beloved rural New Hampshire setting with the dark undercurrents of a community’s racial divisions and betrayals. This is a story of love, of home, of friendship and family, of a childhood’s innocence and an adult’s comeuppance, all of which are in the line of fire in this beauty of a page turner.” —Michelle Hoover, award-winning author of Bottomland and The Quickening.

“Human nature clashes with Mother Nature in this riveting and heartbreaking coming of age story— gorgeously written, and wonderfully told. With its combination of powerful themes and intensely immersive setting, fans of Delia Owens will swoon to find their new favorite author. A phenomenal debut!” —Hank Phillippi Ryan, award-winning author of The First to Lie

“Dalton writes masterfully of human relationship and the fraught relationship humanity has with ecology…put it on your lists NOW.” —Michael Zapata, author of The Lost Book of Adana Moreau

“I marvel when I come across a book that is at once timely and timeless…It’s a novel that burns–figuratively and literally–with sharp prose and uncommon wisdom. Do yourself a favor and have a look for yourself.” —Peter Geye, award-winning author of Wintering

“Waiting for the Night Song is a beautiful book that is also a hell of a read. Complex characters, unforgettable setting, taut storyline, big ideas.” —Ashley Shelby, author of South Pole Station

“Smart and searingly passionate, Dalton’s absorbing mystery debut explores many timely issues including global warming, female friendships, childhood secrets, and the lengths we take to protect them — Waiting For The Night Song is an illuminating snapshot of nature, betrayal and sacrifices set in the evocative New Hampshire wilderness.” —Kim Michele Richardson, award-winning author of The Book Woman of Troublesome Creek

“A killer, gorgeous debut that tackles love, racism and even climate change. Waiting for the Night Song will break your heart, leave you breathless and wanting more.” —Rachel Barenbaum, bestselling author of A Bend in the Stars

“Dalton weaves the vagaries of friendship, the wonder of the natural world, and the power of truth to create a powerful and unforgettable story.” —Erica Ferencik, bestselling author of The River at Night and Into the Jungle

“Dalton’s debut is a story of friendship, family, and the consequences of acting out of fear, especially when those actions are performed to protect those we love. The storytelling is made even more vivid by the way the novel practically breathes the woods of New Hampshire.” —Booklist

“Dalton writes thoughtfully and poetically about a place clearly close to her own New Hampshire–based heart. Cadie and Daniela’s interrupted friendship forms the core of the novel, and Dalton captures that best-friend bond so intensely forged in youth. Through vivid and emotional imagery, Waiting for the Night Song speaks to the power that a place and its people can have over your life.” —BookPage

As a journalist, JULIE CARRICK DALTON has published more than a thousand articles in The Boston Globe, BusinessWeek, The Hollywood Reporter, Orion Magazine, Electric Literature, and other publications. A Tin House and Bread Loaf alum, and graduate of GrubStreet’s Novel Incubator, Dalton holds a master’s degree in literature and creative writing from Harvard Extension School. She is a frequent speaker on the topic of writing fiction in the age of climate crisis. A mom to four kids and two dogs, Dalton is an avid skier, hiker, and kayaker. A former beekeeper, she also farms a gorgeous tract of land in rural New Hampshire.

1. What were your initial theories about the secrets Cadie and Daniela share? How did your impressions of the characters shift as more revelations were uncovered? In the end, who (or what) is ultimately to blame for those layers of deception?

2. From the mountain pine beetle to Bicknell’s thrush, what did the novel help you see in the intricately interconnected worlds outside your door?

3. In chapter ten, Cadie and Daniela take a blood oath to live by the Poachers’ Code, and they agree to use the code only for good. Re-read the code and discuss the wisdom as well as the potential risks in those ten rules.

4. In what way are Garrett, Daniela, and Cadie all “poachers” in their community? What does it take to belong in their town? How do girls and women fare there?

5. As Cadie and Daniela created an underground library for Garrett, with references to classics like Kidnapped and The Call of the Wild, what memories did this stir for you? Which of your own favorite books would you have wanted to share with the Summer Kid?

6. What does the novel demonstrate about the power of family ties? How does Daniela’s family life compare to Cadie’s? How does the fracturing of a family affect Garrett? What legacies do Raúl and Dolores pass down to Sal, intentionally or not?

7. In chapter twenty-nine, we watch Piper offer a survival-of-the-fittest theory regarding forest fires; the author tells us, “Cadie wanted to admire the purity of Piper’s motives, but her naiveté was dangerous.” How did you react to their debate? How does their conversation compare to the sound bite approach to conflicts over environmentalism? What are the benefits and challenges of hashtags like #CadenceUnderFire?

7. The budding romance between Cadie and Garrett is cut short when they are young, but they eventually have a chance to pick up where they left off. If you were Cadie, would you have dated Garrett?

8. Cadie and Thea take a stand and are willing to lose their jobs over federal attempts to quash their research. Yet, scientific discovery relies on public funding, which is tied to the attitudes and opinions of voters. What would it take to resolve that power struggle?

9. If you could write new legislation to protect immigrants in Raúl and Dolores’s situation, what new systems would you introduce?

10. The friendship between Daniela and Cadie is tested throughout their lives. This is sometimes exacerbated by the fact that Cadie will never be the target of racism, and she has the advantage of citizenship. If it weren’t for these differences, would their friendship have been even stronger?

11. The novel’s theme of survival is reflected in the concept of habitats and home—such as the bear trying to escape the flames, and Cadie’s attachment to the rustic house of her youth. How can humans fulfill their need for shelter without putting other living creatures in jeopardy?

12. The author wove beautiful details into the setting for Waiting for the Night Song, including Ice Age glaciers dropping chunks of granite on the forest floor. As you read the book’s closing paragraph, what did you predict for the future of Cadie’s world (and ours)?