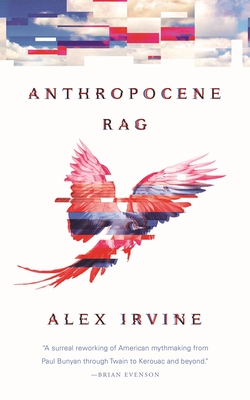 In the future United States, our own history has faded into myth and traveling across the country means navigating wastelands and ever-changing landscapes.

The country teems with monsters and artificial intelligences try to unpack their own becoming by recreating myths and legends of their human creators. Prospector Ed, an emergent AI who wants to understand the people who made him, assembles a ragtag team to reach the mythical Monument City.

In this nanotech Western, Alex Irvine infuses American mythmaking with terrifying questions about the future and who we will become.

Alex Irvine is the author of A Scattering of Jades, One King, One Soldier, The Narrows and Buyout, as well as licensed work in the DC, Dungeons & Dragons, Foundation, Independence Day, Marvel, and Supernatural universes among others. His short fiction has appeared in most of the major magazines, including The Magazine of Fantasy & Science Fiction and Asimov’s, and in many anthologies, and has been collected in Rossetti Song, Unintended Consequences, and Pictures from an Expedition. He lives in a 160-year-old house in Maine where there is not a level floor to be found with four kids, two dogs, one bird, and one snake.
Loading...
or support indie stores by buying on
(This book is on backorder)